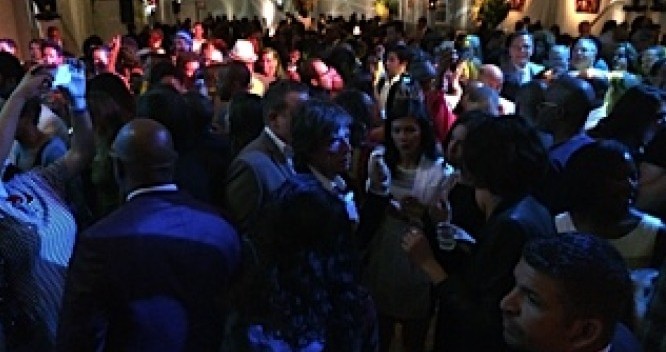 Mick Jagger can’t resist a good dance groove. Accompanied by many of his children and grandkids, Mick danced up a storm on Monday at the after party behind the Apollo Theater for the movie “Get On Up.” The film had its premiere earlier in the night, with several members of James Brown’s family in attendance. The movie is about the Godfather of Soul, and features an absolutely stunning Oscar worthy performance by Chadwick Boseman.

There was also a nice contingent of agents and managers including Fred Spektor, Adam Schweitzer, Emily Gerson Saines, and Bryan Lourd. No less than Ron Meyer and Donna Langley were there from Universal, and of course Brian Grazer, for whom this was a passion project.

The movie jumps around a bit and is not told in a linear order. But you can put that aside. The music is wonderful. The performances are each spot on, with Viola Davis turning in her usual tour de force as James’s abandoning mother. Nelsan Ellis is a real find as Bobby Byrd, although I wish director Tate Taylor had given him a chance to perform Byrd’s big solo hit “You Got Soul.”

There will be some carping about the storyline. But James Brown was a highly eccentric and unsympathetic person. He was not Ray Charles. His patois was a language unto itself. I give the filmmakers credit for trying to capture some of Brown while still immortalizing his fierce talents. This was not an easy assignment. The movie also kind of sputters out, when it should have ended in 1985 with Brown’s resurgence as a star and his song “Living in America.” That’s a big miss.

But we do get a sizable helping of Mr. Brown through Boseman. The actor is simply remarkable re-creating Brown’s footsteps and singing. Considering how hard it’s been to get movies made about Jackie Wilson, Marvin Gaye, and so on, it’s amazing this one has been done at all. It absolutely should not be missed.

I did ask Jagger about meeting Brown, and he said over the years they had several interactions. Before the film screened, Jagger joked about coming to the Apollo and seeing James Brown for the first time. “I was offered a very large joint,” he joked. The drugless Rolling Stone declined, but had a good laugh.

Considering what Jagger’s been through this year, he looked pretty damn good. He relaxed at the party and enjoyed his large family, jumping onto the dance floor to a Chaka Khan song while Robinson– who’s in the movie and was in “The Office”– did some emceeing and freestyle rapping. At one point, Jagger had a dance off with James Brown’s young son, James Brown II, who’s 12 and has his father’s dance moves. If you’re looking for the next Michael Jackson, this kid may be the one.