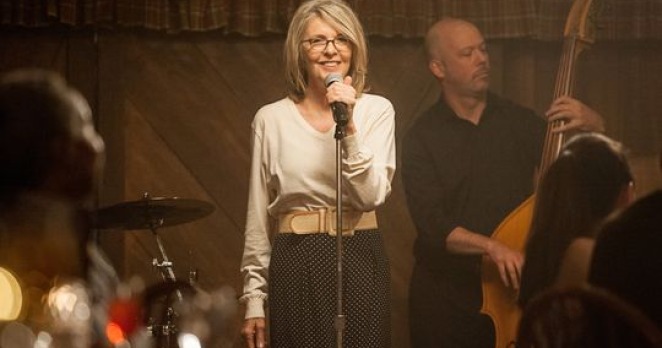 I can tell you right now that when Rob Reiner’s “And So It Goes” opens on July 25th, everyone’s going to be talking about one thing: Diane Keaton’s amazing performances singing standards with a jazz band.

Later, over at the ever popular Nick & Toni’s for a post screening dinner, famed rock promoter Ron Delsener came straight up to the dazzling Keaton. “I want to book you into the Cafe Carlyle,” he announced. “You’ll sell the place out!”

Keaton sputtered, “Okay,” not realizing at first to whom she was speaking. When she finally figured out what was going on, she was thrilled. The Cafe in the Carlyle Hotel on Madison Avenue is home to Woody Allen’s New Orleans jazz band, Elaine Stritch and countless other stars. The late great Bobby Short made it famous.

Keaton brought her son and daughter with her to the premiere– her son is obsessed with pop star Jason Derulo, among others. The kids were with her on Saturday too when she signed copies of her latest book, “Let’s Just Say It Wasn’t Pretty.” The signing attracted so many people to BookHampton on Main Street that they spilled down the block and mixed with the guests at the opening of designer Lisa Perry’s hot new boutique.

Meanwhile back at the screening, Clarius Entertainment’s William Sadleir introduced Reiner, and told us all about his new company’s plans to make movies for adults that aren’t franchise sequels featuring super heroes. Reiner told the crowd when he hired Keaton, she told him she just doesn’t really act, she just what she does.

That’s not exactly so. Keaton and Douglas, as well as the terrific Frances Sternhagen, newcomer Sterling Jerins, “Rocky” star Andy Karl, and Annie Parisse make more out of Mark Andrus’s screenplay than anyone could imagine. If you want to know what real stars can do, watch Keaton and Douglas together. They are luminous.