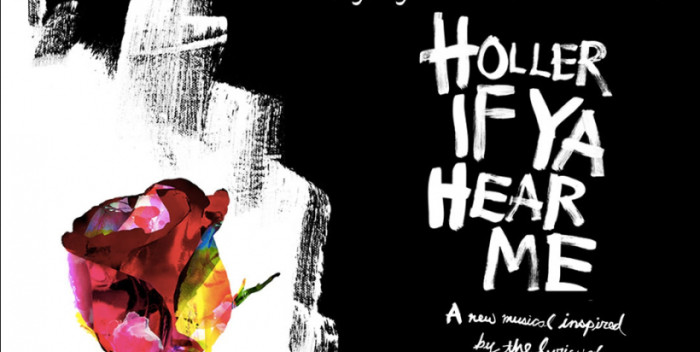 You’d think Kenny Leon is busy enough. He just won the Tony for reviving “A Raisin in the Sun” with Denzel Washington. But last night he premiered “Holler If Ya Hear Me,” an exciting if uneven Broadway musical that features the poetry and lyrics of the late great Tupac Shakur.

They’ve cut the number of seats in the Palace Theater orchestra section and reconfigured the stage. Now the audience really feels part of the show which is a fictional story written around Tupac’s work. The performers are so stunning, and many of the numbers so brilliant, “Holler”  turns out to be a post- Tony Award gift.

A little detail: suddenly early in Act 1 you hear Suzanne Vega’s “Tom’s Diner.” Why? Tupac himself sampled it for his “Dopefiend’s Diner.” Vega isn’t credited, but she gets paid for the sample again. It’s probably the best piece of music in the show, certainly catchier than some of the sort of bland R&B pop numbers that were constructed around Tupac’s incendiary words.

Why didn’t this show open in time for the Tony Awards? It could certainly have been a Best Musical nominee. The answer is: it wasn’t ready. Members of the cast told me the show was just “locked” on Monday. “Almost nothing was finished last week.”

You do not want to miss Chris Jackson, Saul Williams, Joshua Boone, the gorgeous voiced (and personned) Saycon Sengbloh, or the magnificent Tonya Pinkins. Stand out in the chorus is Christina Sanjous, who starred in “Baby It’s You” and “Forever Dusty.” She should be a Broadway lead in every show. Ben Thompson is wonderful as the owner of a mechanic and body shop, coming straight from “Matilda,” of all places.

Don’t underestimate this audience, which last night included Vince Vaughn and Sam Rockwell,  Amber Tamblyn, and Sherri Shepherd. Everyone in their 30s knows the words to Tupac’s songs, black or white. They sing along, rap along, and start dancing. There’s a buzz in the air. I really hope this show makes it.