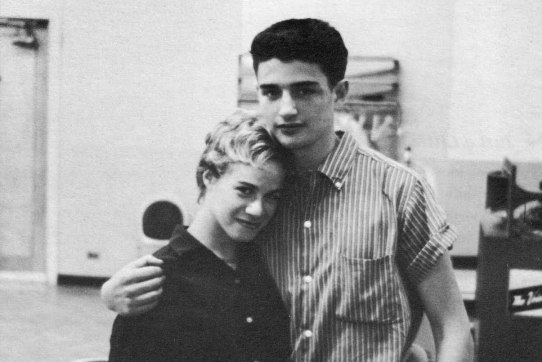 UPDATE FRIDAY 12:40AM: Neil Sedaka on the passing of Gerry Goffin: “I am saddened to hear about the passing of Gerry Goffin. We all started together in The Brill Building.  As a matter of fact, I was the one who brought Gerry and Carole King up to the offices of Aldon Music where they signed with Don Kirshner and Al Nevins. I remember when we were all growing up in Brooklyn; singing on the street corners, at the local hops. Gerry was a brilliant lyricist in our business. The great “Will You Love Me Tomorrow”, “Up on the Roof” and “Saving All My Love For You” were over and above the typical pop song of the day. Every time one of his songs is played on the radio, he will live on. My condolences to his wife and his family.”

Gerry Goffin died today of “natural causes,” according to his wife, Michelle. He was 75 years old.

Carole King said in a statement: “Gerry Goffin was my first love. He had a profound impact on my life and the rest of the world.  Gerry was a good man and a dynamic force, whose words and creative influence will resonate for generations to come.  His legacy to me is our two daughters, four grandchildren, and our songs that have touched millions and millions of people, as well as a lifelong friendship. He will be missed by his wonderful wife Michele, his devoted manager, Christine Russell, his five children, and six grandchildren.”

Gerry Goffin had a crazy life, more of which can be told later. He was a poet, and a tortured soul. I think Michelle was his fourth wife. After Carole there was at least Ellen, and Linda. This doesn’t count the backup singer with whom he had a child while he was married to Carole during their outstanding and prolific heyday. Some of this in the musical “Beautiful.”

But the main thing about Gerry Goffin is that he wrote all those hits with Carole– from “Will You Love Me Tomorrow” to “The Locomotion” and so on. He wrote the words to “Up on the Roof.” He also wrote lots of hits with other people including “”I’ve Got to Use my) Imagination” for Gladys Knight and the Pips, “Saving All My Love for You” for Whitney Houston, and “Do You Know Where You’re Going To” for Diana Ross.

Gerry came to the opening of “Beautiful” just a few months ago, so he knew that his legacy would live on and on. I’m sure they’ll have a moment of silence tonight at the show. When the Beatles came to America, they wanted to be Goffin and King. Let’s never forget that.