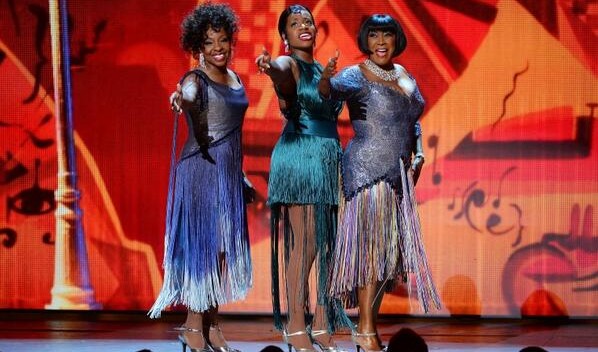 Did you see and hear Gladys Knight last night? She rocked the Tony Awards with Patti LaBelle and Fantasia! Gladys joins the Broadway show “After Midnight” in mid July. Stars Dule Hill and Karine Plantadit  are very excited– not just about Gladys but about Patti, too. She starts with the show tonight.

Last night at Rick Miramontez’s swanky after party at the Carlyle Hotel, Karine– a wild one, maybe the best dancer on Broadway, a real unknown star–was so happy she nearly jumped out a 28th floor window! (Just kidding– but we were “worried”!)

TOMORROW night– Tuesday June 10th– the legendary Gladys headlines the Apollo’s 80th anniversary with Natalie Cole, the Isley Brothers, Wayne Brady emceeing, plus Joss Stone is coming from the UK, and Ray Chew’s band is playing. This is the night of nights in New York, the only place to be. I have no idea if there are still tickets, but call them up. Go to a scalper. Do what you must! The Apollo is the cornerstone of Harlem, one of the dozen or so most important institutions. Jonelle Procope knows what she’s doing up there!

And what a music week in NYC! Aretha Franklin plays Radio City on Saturday and Sunday nights. We are over the top in classic soul. Treasure it while you can !