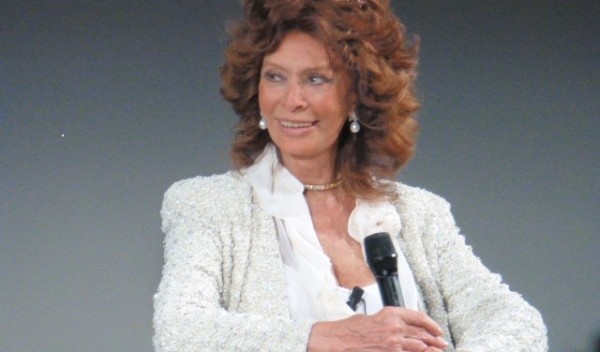 Cannes: The great Sophia Loren gave a 90 minute interview today disguised as a “master class.” She told the audience at the Salle Bunuel in the Palais des Festivals “I was never beautiful. I was never considered photogenic.” When one audience member asked if it was important to be beautiful as well as talented in order to be successful, she quickly said “No.” All this coming from maybe the most gorgeous actress ever on the silver screen

The master class, or whatever it was, was set for 4:45pm. Nearly two hours before that, people started lining up in the overheated hallways. Security guards were unprepared for what turned into an onslaught. The whole scene looked like people trying to see The Beatles, not a nearly 80 year old Italian actress.

The Q&A following the interview and nearly as disorganized. And Loren, very cutely, kept slipping from French to Italian and back again, making the translator crazy. She could have spoken in English of course. But that would have been too easy.

At the mention of her great lover and co-star Marcello Mastroianni, Loren, actually teared up, cried a little and had to stop for a second. Of her great movies, she said that in “Arabesque” she “didn’t understand one thing.” She said, of the thriller which co-starred Gregory Peck, “I never knew what I was doing.”

Loren said she agreed to be in the movie musical “Nine” in 2009 to act with Daniel Day-Lewis. She played his mother. “He’s the greatest actor in the world today,” she said.

Loren wore a chic white pants suit studded with Swarovski crystals. She turns 80 this fall, but doesn’t look it or sound it. She said in order to succeed at anything you must be “obsessed”

“You have to be strong every single day,” she added.