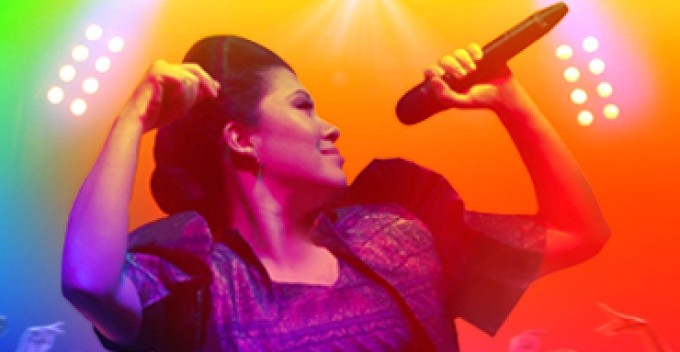 The best show on or off Broadway, sorry Tony nominees, is the revived David Byrne musical, “Here Lies Love,” at the Public Theater. The kooky wonderful brilliantly staged show about, of all people, Imelda and Ferdinand Marcos, re-opened last night after a break of a few months. The Public says it’s there indefinitely. But if you don’t get down there right away, you are missing something important.

It’s easy to say “Here Lies Love” is new, fresh, refreshing, etc. Especially in light of the really awful original musicals of this season. But “Here Lies Love” is more than that. Byrne, director Alex Timbers (now on Broadway with “Rocky”), musical contributor Fat Boy Slim collaborated on something ingenious here. I guess the new name for this is immersive  theater.” The audience is part of the show.

No, it’s not “Tony and Tina’s Wedding.”  The audience is a character. Parts of the stage move so that the audience, mostly standing (there are some seats) flows with the sung-through show. We are spectators as Imelda meets Ferdinand after dating Benigno Aquino. She marries the Phillippine dictator and they become drunk with power. The audience– us — are the Filipinos  who witness this trajectory.

Meanwhile, a small but hugely talented cast of almost all American-Filipino actors perform a kind of pop opera. Byrne’s songs are “immersively” catchy. The lyrics advance the story. The music ranges from rock to ballads with sparkling originality equal to Byrne’s best work with the Talking Heads. Everyone who’s heard the original score album and the best selling guest star album already has favorite numbers. From the title track to the potential top 40 rock hit “Why Don’t You Love Me?” the songs little masterpieces.

Of course, they wouldn’t without the actors. Ruthie Ann Miles is still a revelation as Imelda, and Jose Llana as charismatic and then some as Marcos. Conrad Ricamora is a breakout as Aquino (and apparently Hollywood has already come calling during the show’s break). There isn’t weak link in the chain. “Here Lies Love” has the most consistent cast in town.

During last night’s show, Byrne stood in the audience, danced with abandon, and had a grand time. What else would he do? He’s written something he can be confident is special. “The Great Gatsby” director Baz Luhrmann was a surprise audience member. He came with a friend, fell in love with the show, and visited the cast backstage.

See this show, that’s all I can say. Other than “Gentleman’s Guide,” it’s the best show in New York right now, or anywhere else. The only reason it’s not on Broadway was the producers couldn’t figure out how to move it without losing the interactive part. Byrne told me “we actually priced how to change over a theater and it was just too expensive.” Forget “If/Then.” This is “Right/Now.”