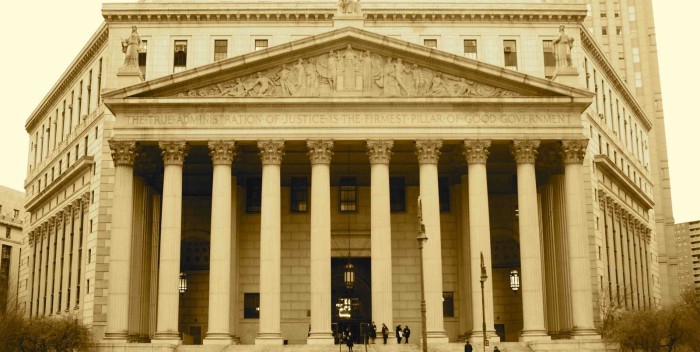 Graydon Carter knows how to publish a magazine, and he really knows how to throw a party. His annual fete for the Tribeca Film Festival is usually on the front patios of the New York State Supreme Court house in Foley Square. But it was freezing and extremely windy last night, so the party was moved inside the massive Gothic-columned lobby.

This is usually where lawyers, defendants, and judges line up in the morning, go through metal detectors, and hope their appearance doesn’t set off a guard dog. Somehow, VF cleaned the place up, polished the brass fixtures, scrubbed down the alabaster sconces and made it presentable for celebrities and media elite.

Carter, his wife Anna, Robert and Grace DeNiro, and Jane Rosenthal in a beautiful red gown welcomed quite a gang. Mike Myers came with rock manager Shep Gordon, subject of his new documentary. They chatted with Courteney Cox, who has a film at Tribeca, too, as well as director Ron Howard, Bob and Lynn Balaban, and Kate Walsh of “Grey’s Anatomy” fame who just had a cool run in the Fargo TV series.

What made the party so great? Yeah, the people were pretty interesting. But the food was from Per Se. Thomas Keller was lurking around, making sure everything was just so. Was it the food, ‘per se’? Uh, yes. Now I see why restaurant Per Se is so expensive! If only they had sample sales!

And still I made it to the Theater at Madison Square Garden to see Sting, Sam Moore, and Chris Botti go guest spots with Italian rock star Zucchero. Sam and famed rock promoter Ron Delsener, who are the same age and met in the 1960s, greeted each other the same way, trying to beat each other to the punch: “I thought you were dead!” they said as they hugged. Zucchero’s audience stood all the way through his guests’ duets with him. Sting brought the house down with “Every Breath You Take” and “Mad About You.” Sam unleashed a wild version of “Soul Man” and a poignant “You are So Beautiful,” dedicated to Billy Preston.

Meantime, it’s frigid cold and blowing up a storm outside. Everyone’s wearing winter coats on April 23rd. Mike Bloomberg would never have let the weather get so out of hand! Bill DeBlasio, pull some strings already!