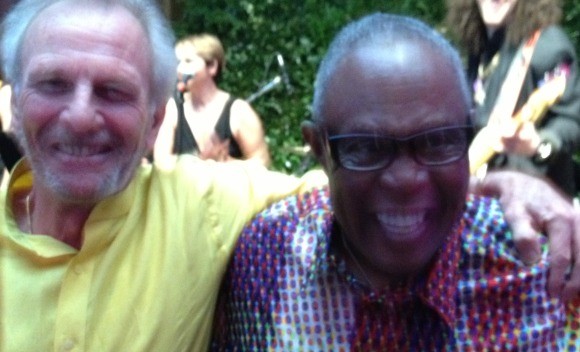 Shock: Mark Shand, the great British adventurer and environmentalist, died at age 63 this morning in New York after falling late last night and hitting his head.

Let me tell you why I am so shocked. Before Mark and some friends went over to the Diamond Horseshoe club on West 46th St., he hosted a benefit fundraiser at Sotheby’s for his elephant charity. Jamie Niven helped auction off dozens of Faberge-produced “eggs” designed by artists. One of them, by Jeff Koons, sold for $850,000. The night was a total success.

Rock & Roll Hall of Fame legend Sam Moore, at Shand’s request, brought his whole band including the Uptown Horns, and did a 30 minute set. The whole place was dancing. I was there. Shand danced to “Soul Man” and Moore’s other hits, took the microphone, and sang Sam’s praises. He showed us the elephant tattoo on his right forearm and said, “I got this when I first went to save the elephants.”

One of the eggs was signed by Prince Charles and Shand’s sister,  Camilla Parker -Bowles. The artist turned it into Humpty Dumpty. Everyone wanted it.

It was the one and only time I ever spent in the company of Mark Shand. Even if he hadn’t died, suddenly and tragically, today, I would have told he was one of the most charming, down to earth, nicest people I’d ever met.  The fact that he died in accident a short time later is just stunning. I’m sure everyone who was at Sotheby’s, including his daughter, is in shock.

Lesson that can never be over-stated: Life is precious. Live every day to the fullest.