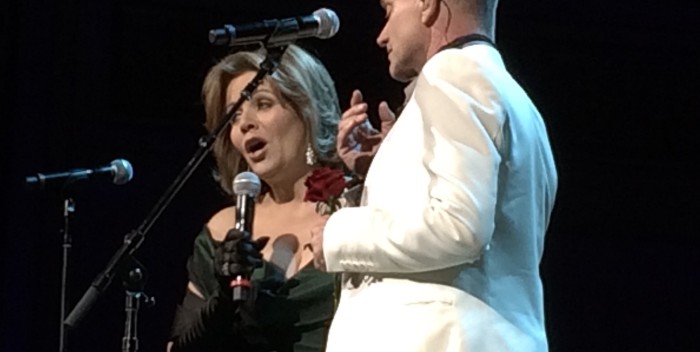 When Bill Clinton walked on stage last night I don’t know who looked more surprised, Sting or wife Trudie Styler. There was such uncertainty that Clinton would come, let alone give a talk to the star studded Carnegie Hall audience for the Rainforest Foundation’s 25th anniversary, that he was never announced. And no mention of him was made all afternoon during rehearsals.

But Clinton did show up, just at the end of Act 1, in the break between Stephen Stills’ two songs, and rocked the house. The place went wild as Clinton not only spoke about Sting and Trudie’s dedication, but let Kevin Spacey do imitations of the former president at the mike with him. “Sometimes you can’t tell who’s talking,” Clinton said. Then referring to Spacey’s role as a vicious president elect on “House of Cards,” Clinton marveled of Spacey’s Frank Underwood, “He’s president and a murderer.”

Clinton was only one hit of amazing night produced by Styler and Sting. They put together an eclectic list of artists and came up big winners with Paul Simon, James Taylor, Stephen Stills, opera great Renee Fleming, Chris Botti Dionne Warwick, Patti Scialfa, and Oscar Isaac from “Inside Llewyn Davis.”

The Rainforest show began with Sting, James Taylor and Kevin Spacey, wittily commiserating and singing around a leather padded bar to “What a Swell Party” from “High Society.”

And as usual the concert had a family element to it. Sting’s son Joe Sumner delivered a more than credible “Smells Like Teen Spirit” with Narada Michael Walden’s house band. Sting and Trudie’s daughter Eliot (aka Coco) Sumner rocked a gravelly “Born to Be Wild.” Famed backup singer Lisa Fischer (from “20 Feet to Stardom”) and sensational Ivy Levan did a Rolling Stones medley of “Start Me Up” and “Jumpin’ Jack Flash” that tore the paint off the ceiling of Carnegie Hall.

All of Sting’s family was there: six kids, two grandchildren (including a 12 week old baby Chloe), sister Anita, loads of friends, loyal Rainforest concertgoers from the last quarter century, as well as pals like Rita Wilson, billionaires Ronald Perelman and Len Blavatnik, and Melanie Griffith– friends with Sting since their classic film “Stormy Monday” some 25 or more years ago.

Styler, looking stunning in a brilliant white gown, told the audience that in 25 years the Rainforest Foundation had raised an astounding $35 million to protect the rainforests of the world and their indigenous people. The foundation is easily the most consistent charitable organization started and run by celebrities with a cause ever. As Simon noted, charities that followed– like his Children’s Health Fund– looked to the Rainforest Foundation as an example of how it’s done.

There were some lovely turns: Dionne Warwick, a national treasure, found some notes we hadn’t heard for a long time on “Walk on By” and “Anyone Who Had  a Heart.”  Oscar Isaac, overdue for his own album, reinvented Rod Stewart’s “Young Hearts” into a bluesy folk number. Patti Scialfa partnered with Sting on an irresistible “Stand by Me.”

The show also gave Sting and Paul Simon to reprise their collaborations from last month’s successful joint tour. Who knew that Sting’s voice would be so well suited to Simon’s songs. He breathes new life into “Bridge Over Troubled Water,” “The Boxer,” and “America.” Simon added “Graceland” as a solo number.

Taylor contributed “Fire and Rain” and “How Sweet it Is” on his own. Stephen Stills, a newcomer to the Rainforest family, gave the group a couple of depth charges with “For What It’s Worth” and and the Latin tinged “Amazonia. All the artists pitched in for a big finale on “Love the One You’re With.”

And what of Patti’s husband, Bruce Springsteen? He came to rehearsals to cheer Patti on, but was in Nashville by 7pm to play a three hour, thirty minute show with the E Street Band. I am not kidding. I saw him at around 2:50pm leaving Carnegie Hall. Now I’m reading reviews of the Nashville show. Amazing.