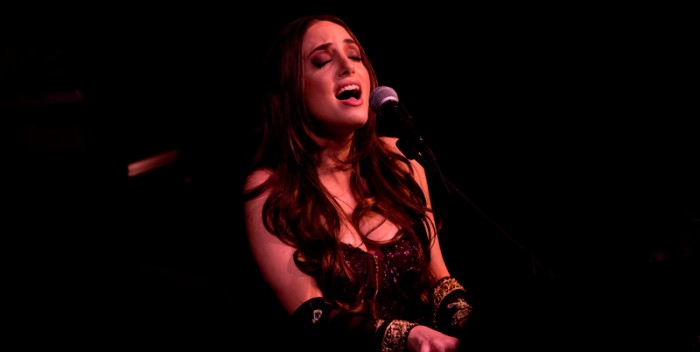 First, let’s get this straight: Alexa Ray Joel has not had extensive plastic surgery. She had her nose done years ago and admits it. When I walked into the Cafe Carlyle last night to see her perform, I half expected to see, as she joked later, “Joan Rivers.” The 28 year old daughter of Billy Joel and Christie Brinkley was photographed in stage makeup by the New York Post. She’s a little older, wiser, and thinner. But otherwise, she’s still the sweet kid I’ve known for years.

Second, at the Cafe Carlyle she comes into her own. Already a proficient songwriter and singer, Alexa Ray is now ready for the big time. Watching her last night she brought back memories of Melissa Manchester, Carly Simon, and even a little Lady Gaga when she was still Stefani Germanotta. Alexa Ray’s voice has found its groove, and sounds ready for radio as well as cabaret and rock halls.

Her mom, Christie Brinkley, was in the audience, as was her 18 year old brother Jack, a freshman at Emerson College. Minnie Driver, who’s getting to release her own new album in June, came as a guest of manager Jason Weinberg. Otherwise, the audience — just regular peeps who paid money for a show and dinner at New York’s premiere small club– couldn’t have been happier.

Alexa Ray is a charmer with her own distinct personality. She’s funny, telling stories about her parents, especially how her mom is ever cheerful. “Why didn’t I get that gene?” she joked. She dedicated “Sunny Side of the Street” to Christie. When she played Billy’s “Just the Way You Are,” she stopped in the middle and bemoaned, “There are so many chords in this song!” Then she turned her dad’s 1977 ballad into her own lovely bluesy creation.

One of my favorite numbers of the night was a cover of Procol Harum’s “Whiter Shade of Pale,” accompanied by cello. It’s a great idea, and could be a hit single.

The hardest thing to do for a celebrity’s kid is to find their own identity in the same arena. Now I am happy to report that Alexa Ray has stumbled on hers by choice. She is a natural for cabaret, and maybe even for Broadway. Her song writing is sophisticated yet accessible. She’s blossomed into a natural beauty. And her voice and her piano playing echo Carole King and Alicia Keys.

She’s at Cafe Carlyle next Tuesday through Saturday. In the old days, this would like catching a great debut at the Bottom Line. See Alexa Ray Joel now. Just the way she is: the real thing.

PS Her voice has taken on such a beautiful, distinct bluesy flavor, I think she’d be a natural guest performer on Broadway in “After Midnight.” Scott Sanders, take note!