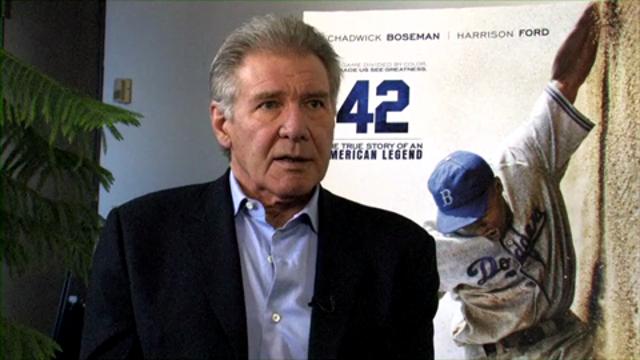 Harrison Ford, just as he arrived at the red carpet on Sunday afternoon, with beautiful and gracious wife Calista Flockhart. Red faced and a little confused. Was he stoned? Medicinal marijuana, likely. Nothing illegal. I asked if he were presenting on the Oscars? Harrison replied: “Yes.” Which category, I wondered? “Best Picture,” he replied in a whisper. Now, that’s a big deal. He is Hollywood royalty now. Makes sense. So imagine my surprise when shortly into the show, Ford appears on the stage He introduces clips from three of the Best Picture nominees. This is what he meant, I guess. He was showing clips from the Best Pictures, not giving the Best Picture award…

Spotted in the audience but not otherwise detected: Johnny Knoxville. Keith Carradine. Eli Roth. Colleen Camp.  John Stamos. There are plenty of actors who don’t walk the red carpet, but are invited by the Academy. They just come and enjoy the show like everyone else. In the blur of dealing with nominees, these people are like happy non sequiturs. In the parterre section, which just above the orchestra, I ran into Dr Mathilde Krim, founder of amFAR, widow of Orion Pictures’ Arthur Krim, who was Woody Allen’s guiding light for years and years. Another lovely surprise.She clapped hard when Woody’s name was called out in the Original Screenplay category.

Favorite bar mate of the evening: director John Singleton and his beautiful wife. He’s working on the Tupac Shakur movie. Crossing my fingers. Should be amazing. Also: shout out to Cate Blanchett and her posse including husband Andrew Upton, agent Hylda Queally, and publicist Lisa Kasteller. They rock! Also, Sally Hawkins. If we could bottle her we’d make millions. When Cate met Julia Roberts in the bar, they showed each other pics of their kids on cellphones, of course.

So many mothers, and fathers: Jennifer Lawrence’s parents are the nicest, classiest couple. Everyone loves Leonardo DiCaprio’s mom. His dad, George, is a character. They were all there. Matthew McConaughey’s mom is hot stuff, she was even in “Dallas Buyer’s Club.” Jared Leto’s mother has to write a book. You can tell she is amazing, and really toughed it out for her sons. Lupita Nyongo’s mother is gorgeous, naturally, and very articulate. David O. Russell’s dad worked at Simon & Schuster before he retired; he and his wife are tireless supporters of “American Hustle.” And don’t let me forget Will Forte’s mom, whom we met last year on the set of Peter Bogdanovich’s “Squirrel to the Nuts.” At 2am she was raring to go to Madonna’s party with Will. I hope that worked out!

Oh one more thing: who did Sandra Bullock take as her date to the Oscars? Why, her publicist, the wonderful Cheryl Maisel. Many stars relegate the publicists to ‘help’ status. You know we love S Bullock and this is why. Maisel worked like crazy on “Gravity.” Sandy said, ‘You should be there.’ And she was, in the front row. Mensch!

PS Loving Cindy Adams writing about the Oscars and LA in the NY Post. No one else like her!