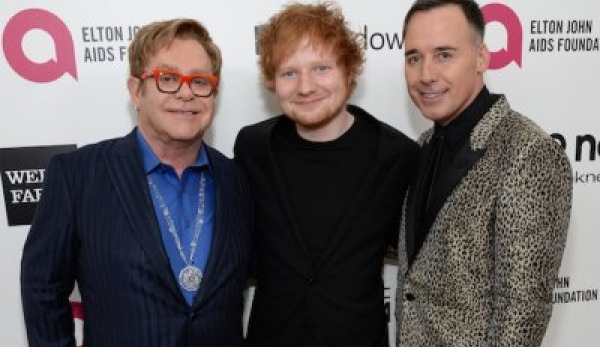 And now the good news from Oscar night: the viewing party for Elton John’s AIDS Foundation raised a whopping $5.1 million for education and research. Not bad!

It was a rockin’ dinner too with guests like Elton’s great songwriting partner Bernie Taupin, Ann and Nancy Wilson from Heart, Josh Groban, Sharon and Ozzy Osbourne, Kenny Babyface Edmonds, Steven Tyler, Taylor Swift, plus record producer Richard Perry and Jane Fonda. Whoopi Goldberg dropped in after presenting at the Oscars, Jared Harris stopped by, as did Lady Gaga and dozens upon dozens more. I also heard there were Kardashians roaming around, as is their wont.

British sensation Ed Sheeran entertained the crowd with a set that included a duet with Sir Elton. My nieces introduced me to Ed, he’s their 1971 Elton of 2014– they just don’t know it. Later in the night I caught up with Sheeran, who’s 23 and a lovely chap. He literally looks like the son Van Morrison never had! His new album comes out in June. I asked him what it’s like to be a rock star with all the sex and drugs. He quipped: “Is it all right if I’m the rock star who doesn’t do drugs?”

It is, I replied!

As for the whole big Elton party, set up next to the Pacific Design Center: it’s like a trip to heaven, with massive spaces all draped in what looks like white sheets. A lot of the girls, including Petra Nemcova, walked around barefoot on the thick white carpet. And you always get the best chocolates at the Elton John party! A great night!