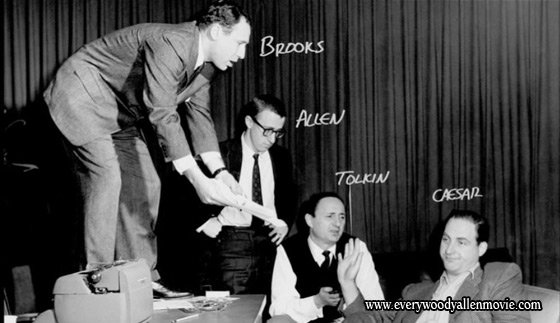 Mel Brooks and Woody Allen, of course, each wrote for Sid Caesar. Brooks was part of “Your Show of Shows” and remains entwined in memory with Caesar and Carl Reiner (who at 90 just appeared in “Two and a Half Men”). Woody worked for Caesar in the late 50s on his TV specials with Danny Simon, brother of playwright Neil Simon.

Mel Brooks: “Sid Caesar was a giant—maybe the best comedian who every practiced the trade. And I was privileged to be one of his writers and one of his friends.”

Woody Allen: “He was one of the truly great comedians of my time and one of the finest privileges I’ve had in my entire career was that I was able to work for him.”