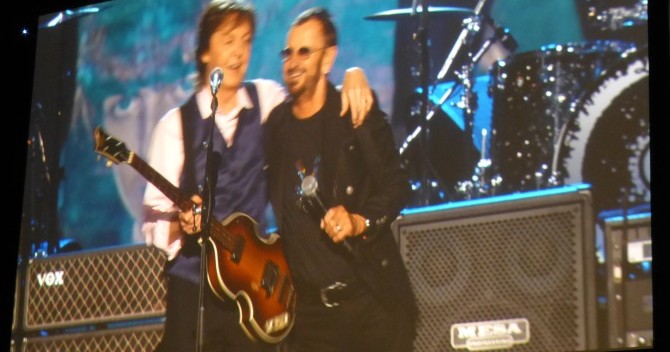 The Beatles were celebrated tonight on the occasion of their 50th anniversary of coming to America with an all star concert in Los Angeles. The concert will be edited down to a two hour special airing February 9th on CBS. But I do think the full version will emerge on DVD. It would be a shame to lose any of it.

Paul McCartney, wife Nancy, Ringo Starr and his wife Barbara Bach, her sister Marjorie with guitarist Joe Walsh plus Olivia Harrison and her son Dhani and Yoko Ono and Sean Lennon comprised the Beatles ‘family’ section of the 3000 seat makeshift theater in the LA Convention Center. It was the same room used for the MusiCares Person of the Year dinner on Friday night.

Tom Hanks and Rita Wilson were in the audience and didn’t participate. But a few actors were used t to introduce segments: Sean Penn, Johnny Depp, Anna Kendrick, and Kate Beckinsale. They were all just sort of random.

Many of the clips we saw in the live show may not make it into the special. But I wish they would be used. There were lots of home movie clips, unseen footage of rehearsals circa 1968-69 during the recording of “Let it Be,” “Abbey Road,” and “The White Album.” There was also footage from the real “Let it Be” sessions called “Get Back” and the Beatles famous rooftop concert.

I Tweeted some of the proceedings @showbiz411. But the highlights, I think were Stevie performing his 1968 hit single We Can Work it Out- and twice, just to get it right. He told the audience he’d first heard the Beatles when he went to Paris as a teen on tour.

Standouts: Keys and Legend in partner pianos playing “Let it Be” and Annie Lennox singing “The Fool on the Hill.” Sheeran does a nice job on “In My Life.” Dave Grohl and Jeff Lynne rocked out on “Hey Bulldog.” Urban and Mayer were great on “Don’t Let Me Down.” Dhani Harrison joined Jeff Lynne and Joe Walsh on a haunting version of George Harrison’s “Something.”

But everyone came to see Paul and Ringo. After Ringo– the greatest rock and roll drummer ever– performed “Matchbox” and “Boys,” and led a singalong in “Yellow Submarine,” McCartney spoke to the audience.

“Tonight,” he said, “we’re remembering our beautiful friends John and George.” What followed was the magic moment of the night– Paul leading “Sergeant Pepper’s Lonely Hearts Club” band into Ringo as Billy Shears on “With a Little Help from My Friends.” That was it, frankly. Gorgeous. Ringo joined Paul on drums for “Hey Jude” to end the show.

McCartney did tell the audience he’d had some reluctance about participating in a tribute to himself. But then he said Americans told him how much that Ed Sullivan show in 1964 had changed their lives. And that convinced him.

There was a great buzz of excitement in the room. Yoko danced a lot, and the whole gang of extended Beatle family were clearly loving the show. They sing along through the guest artists. Paul and Ringo genuinely enjoyed the night. There was a sense of camaraderie. Producer Ken Ehrlich integrated live bits from the Beatles “Cirque du Soleil” show “Love,” as well. The whole thing is going to look wonderful. CBS should just make it three hours.

PS The band was exceptional, led by Don Was, Steve Lukather, and Peter Frampton. Also, in the clips we saw in the theater, there were rare glimpses of the real “Fifth Beatle,” the late Billy Preston, the only musician ever credited on a Beatles record other than the Fab Four.