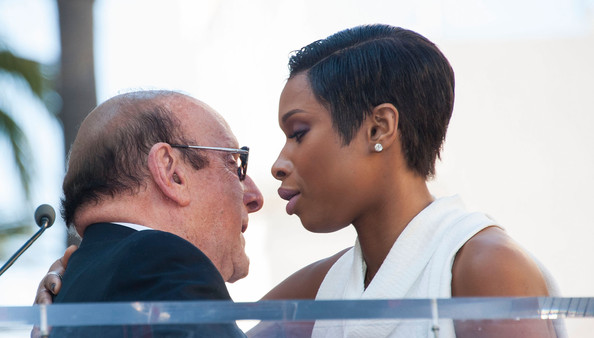 It’s the toughest ticket of the Grammy weekend, Clive Davis‘s pre-Grammy party. For some reason this year is bigger than ever with more bold faced names on the waiting list as the RSVPs come pouring in. Today Jennifer Hudson stopped by to do press with Clive. She’s singing at the show at the Beverly Hilton, sporting a new hot hair cut and her Weight Watchers figure  more svelte than ever. I did ask if she’d like to have dessert some time and she told her favorite: cheesecake! Wait til she tries Eileen’s Special Cheesecake in Soho. So much for Weight Watchers!

So who’s coming? Jamie Foxx has a table, and there’s word that he may be added to the all-star slate of performances as a guest star. Jane Fonda and her beau, legendary record producer Richard Perry will probably sit with The Band’s Robbie Robertson. Robin Thicke and Paula Patton are expected, as are Miley Cyrus, New Zealand phenom Miley Cyrus, and the hotter than a pistol duo of Macklemore and Ryan Lewis.

As has been the tradition recently, Clive partners with NARAS to honor a record industry icon. This year it’s Universal Music Group’s Lucian Grange.

Can you imagine who else is coming? And this is the night after the MusiCares all star tribute to Carole King and the night before the Grammys!

I call it the Jingle Ball for Adults!

More names as they roll in…