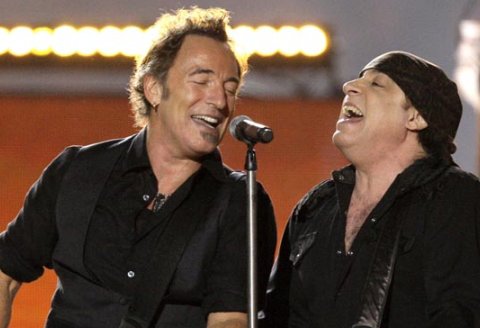 Yo! Bruce Springsteen is back and on top of the charts. His “High Hopes” is numero with 102k copies sold including one I bought today physically on CD at the Culver City Target. Let me tell you, this album sounds fantastic on a good car stereo.

The song choices are just fine, and the band and Bruce are kickin’. Tom Morello guest stars on some of the tracks. After 40 years, Bruce can put out anything out he wants. He’s got nothing to prove. I think “High Hopes” will actually be one of his biggest sellers.

Sharon Jones and the Dap Kings come in at number 22 with 12,105 copies. That’s pretty good considering there’s a smallish effort behind it at best. Sharon may be benefiting from her appearance in “Wolf of Wall Street” singing “Goldfinger.”

Also,Roseanne Cash has a new album out. And for some reason the soundtrack to “Pitch Perfect” is back on the charts. Britney Spears’ “Britney Jean” sold 5,300 copies as it exits the chart at number 48.