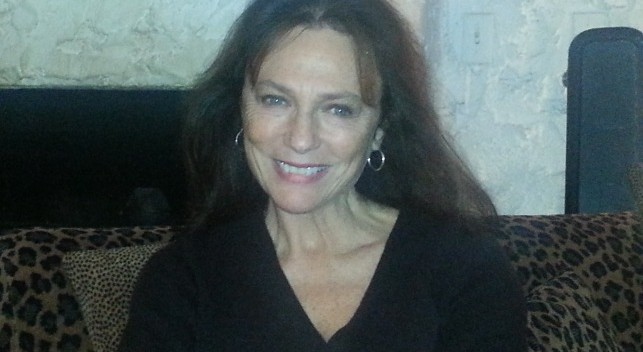 The fuss is that the gorgeous veteran actress Jacqueline Bisset hit the stage with a thud when she accepted her Golden Globe award on Sunday night. She was shocked and in a daze. I sat down with Bisset yesterday in her cozy Beverly Hills home to talk about her much buzzed-about acceptance speech that started with some long pauses. She rambled a bit, and included the word “shit” getting not quite bleeped. “I supposed I should have been more sophisticated,” she told me.

Bisset won for Best Actress in a Mini-Series or TV Movie for her excellent work in “Dancing on the Edge” co-starring “12 Years a Slave” star Chiwetel Ejiofor. She has not appeared on the Globes since she co-hosted the show maybe 30 years ago.She was nominated for Most Promising Newcomer in 1969. She didn’t win.Olivia Hussey was the winner. Also nominated: Sondra Locke and Leigh Taylor-Young.

A great beauty and brilliant actress, Bisset is one of Hollywood’s survivors. She’s always marched to the beat of her own drummer, and blazed a path among her peers.

Her credits include “The Deep,” “Rich and Famous,” “Sleepy Time Gal,” “Bullitt,” “Under the Volcano,” “Murder on the Orient Express,” and TV series such as “Nip/Tuck.” Bisset has worked with countless legendary directors including John Huston and Sidney Lumet.

So let’s set the record straight: she did two and a half hours of press on the red carpet before coming inside the Beverly Hilton. She was hungry and thirsty. She took a sip– a sip– of Champagne handed to her on the carpet. “I was sober as I could be. Believe me, I wasn’t drunk.”

Once inside the ballroom, she discovered dinner was over. A waiter kindly brought her a cheese and tomato sandwich. Fellow nominee Janet McTeer told Bisset that their category would not come up for a while. The actress closed her eyes and regrouped. She did not think she would win at all. And then she heard her name being called.

“I went into my own dream. I was  looking at the program. I was terribly hungry, I was just really listening. I saw a camera man pointing his camera and I thought, who’s he pointing to? I thought, funny how they hang about. I saw several of them  around and didn’t realize they were filming each of us before the awards were called.

Once the show started, Bisset realized she had no information. “I asked Janet, when are we on? And she said, at the very end.” Then it turned out they were right at the beginning, second award. “I freaked out. The walk was very long. It was like a magic carpet. It’s almost like you go silent. I tranced out. I wanted particularly to thank [director] Stephen Poliakoff, and I forgot.

“I was shaking up there. I thought come on, Get yourself together! I was thinking of my mother. She was so instrumental in my life. I was wearing her jewelry. She used to say ‘Leave me the hell in peace! Go to hell and don’t come back.’ She had a very jaunty side.”

Bisset was really stunned. It’s the first big award she ever received after a long, heralded career. “One battles in this business. It looks easy but it ain’t easy. After 47 years…I’m not someone who cultivated fame. I think some part of me revolted…”

She sort of had an out of body experience once she reached the podium. “I felt like it was a moment of generosity for people who gave me joy, of time passing. It all went upside down! Peripherally I heard the music. I felt like it took me 47 years to get here, don’t shush me away. And people seemed to be following me. They were laughing.  And then I got backstage and everyone said It’s all going viral. I’d never gone viral! I didn’t know what that means!”