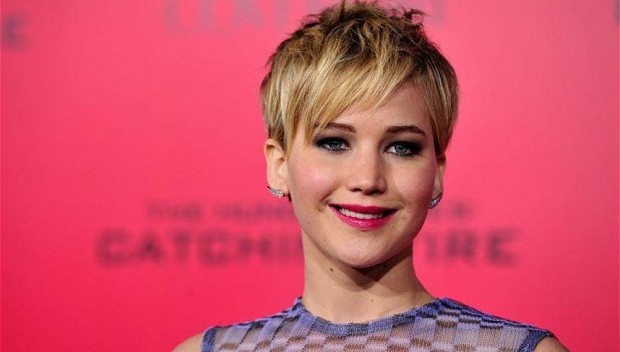 The best thing about this weekend: Jennifer Lawrence has been let out of shooting “Hunger Games: Mockingjay” for five minutes. Here she is, in Hollywood, with her family, probably receiving a Golden Globe award tonight for supporting actress in David O. Russell’s “American Hustle.” (The hit comedy just passed $100 million at the box office this weekend.)

Lawrence was super social at last night’s very swanky Sony Pictures party at the Polo Lounge in the posh Beverly Hills Hotel. This was one of three or four mini galas held around town (Paramount at the Chateau Marmont, CBS Films at Soho House, Sean Penn’s Haiti fundraiser at the Montage) that spread the celebrities thin. You needed a helicopter to get from place to place!

Jennifer was sporting a short haircut–a bob–and I think a desire to talk to people who weren’t trying to kill her with a bow and arrow. She and her “AH” costars Amy Adams and Elisabeth Rohm had a ball in the famed Polo Lounge, chatting away and then delighting in finding a secret path to the ladies’ room.

Later Jennifer and her mom, Karen, got into a hugely funny discussion at their table with Tom Hanks, who was there with wife Rita Wilson to celebrate “Captain Phillips.” “Are you in any films this year?” I asked Tom facetiously. He held up some fingers. “Nine!” he called back.

Jennifer told me she’s trying to decide where to live after “Mockingjay” finally finishes shooting. New York maybe? “Maybe,” said the Kentucky girl. “But I need trees and grass, I need space. I’m thinking about Atlanta. There’s so much going on there, and I can breathe.”

She also told me she’d like to take a year off after making so many movies in a row. “But I think I’d be bored.” I can tell you she would be. Jennifer Lawrence has enough energy for ten people, and let’s not forget, she’s still just 23.

PS Jennifer did give me a couple of clues about who she’s liked this season among the movie performances she’s seen. “I voted for Lupita Nyongo, she’s amazing,” the Oscar winner told me with her infectious laugh. “And of course, I voted for myself!”