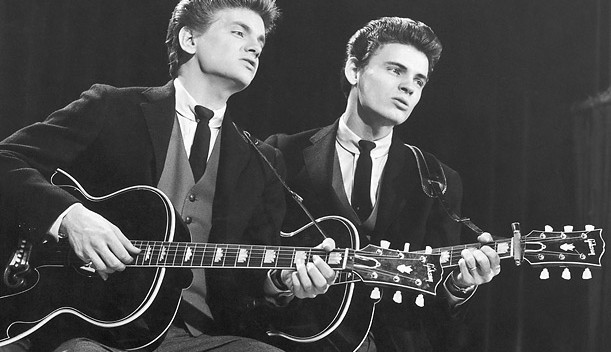 Phil Everly, who won the hearts of many generations singing with his brother Don, has died at age 74. The Everly Brothers’ harmonies sounded like heaven on Earth, and inspired singer from Simon & Garfunkel to Lennon and McCartney, the Mamas and the Papas, and even Elvis Costello, Nick Lowe, and Dave Edmunds. Their hits, from “Wake Up Little Susie” to “Bye Bye Love” still resonate, and sound as fresh as a summer breeze. Like all singing duos (some of them actual brothers) the Everlys didn’t always get on so well. They did reunite in the 1980s for a new album when Paul McCartney wrote them a new song.

Many of their songs were written by Felice and Beaudleaux Bryant, a husband and wife team whose son Dell has long been a guiding force at BMI Music. The Bryants wrote 23 hits for the Everlys. But it was the brothers who sang them, and made magic. Dell Bryant told me tonight that he’d known the Everlys since he was 8 years old. “Phil was the sweet brother, even Don would acknowledge that!” Dell observed. “Phil could sing lead and sing harmony. He was the best at it. He was a good man, a sweet man, a family man and the best damn harmony singer ever.”

Dave Edmunds was once interviewed about the Everlys. Read it here: http://www.rockabilly.nl/references/messages/dave_edmunds_everlys.htm

The Everly Brothers reunion concert is worth watching:

Singing Paul McCartney’s “On the Wings of a Nightingale”: