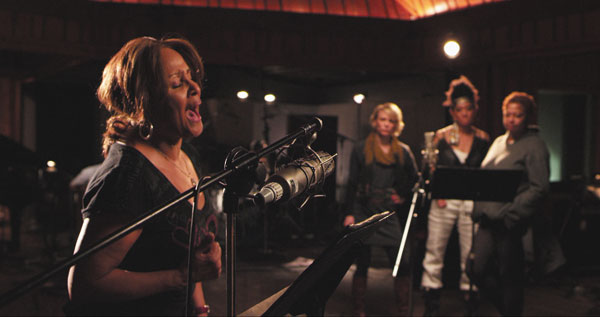 Tonight, Darlene Love performs “Christmas (Please Come Home)” with Paul Shaffer and the band on David Letterman. It’s the 20th year in a row that they’ve done it. So by the time Darlene finished the taping, she she was a little tapped out on that particular song when she arrived at the Rum Room at the Edison Hotel for some Christmas caroling in honor of the documentary “20 Feet from Stardom.”

How-ever: about a half hour after Darlene arrived and warbled with Lisa Fischer and Judith Hill, Shaffer himself came down to West 47th St. from the Ed Sullivan Theater. You can see the results right here: an impromptu version of the song with Shaffer on piano, Fischer and Hill backing him up, along with Glenn Close, Robert Wuhl, Richard Kind, Ilene Kristen, Paul Haggis, Rutanya Alda, and “20 Feet” director Morgan Neville. All you can say is “Wow!”

We were also treated to a spectacular “Have Yourself a Merry Little Xmas” from Lisa Fischer with Robbie Kondor on piano, and a holiday number, on piano, from the amazing new talent Judith Hill. She’s just finishing her first album to be distributed by Sony/Red.

Not only that: the great Peter Cincotti, who came just as a guest, sat down at the piano and led the group in wild version of Mariah Carey’s “All I Want for Christmas is You.”

I was just two feet from all this stardom. Darlene Love, live, is the greatest Xmas treat. She performs tonight at BB King’s in New York for her own annual show, singing songs from Phil Spector’s famed “A Gift For You.” Spector, in jail for life after murdering Lana Clarkson, screwed Darlene and Ronnie Spector and just about all his artists. Their sweet revenge has been surviving, thriving, and continuing to make great music.

“20 Feet from Stardom” is eligible for the Academy Award. Don’t miss it! The DVD arrives January 14th.

PS It was great to see Ilene Kristen, who does not age. Besides being the funniest and freshest soap actress (Ryan’s Hope, One Life to Live), Ilene is a fantastic singer. She’s just finished recording a jazz album which should come out early next year!