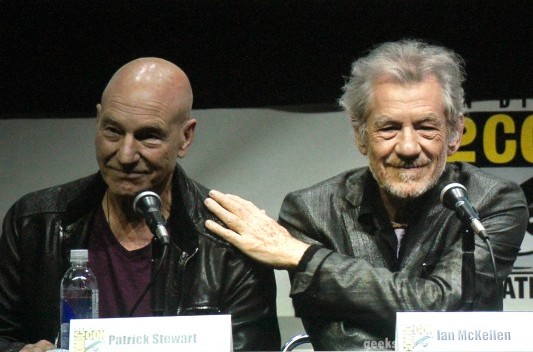 Liv Tyler and Orlando Bloom (Arwen, and Legolas Greenleaf to you) came to celebrate Gandalf. Others came to cheer on the “X Men.” But everyone at yesterday’s and last night’s double Broadway bill of Sir Ian McKellen and Sir Patrick Stewart got the thrill of a lifetime and the best that theater can offer. The two actors, along with Billy Crudup and Shuler Hensley, star in Harold Pinter’s “No Man’s Land” and Samuel Beckett’s “Waiting for Godot.” Let’s skip to the end of the story first: rave reviews in the New York Times.

You can see them separately or together, but I recommend the two plays in a day. They have a lot to do with each other thematically. It’s also an exhilarating experience to see these four brilliant talents put on the plays. Not only them– but the lighting (Tony winner Peter Kaczorowski in his 50th and 51st Broadway openings), set design, costumes– all of it is exceptional. Sean Mathias directed both plays. I can tell you it’s amazing to leave “No Man’s Land” with its vault like clubby set and return two hours later to outdoor rubble of “Godot.” And please, let’s pronounce it correctly– GOD-oh.

Mathias has made the two plays into existential comedies with touches of Charlie Chaplin. The actors are up to the task, particularly Crudup and Hensley in “Godot.” But throughout the two plays, it’s Sir Ian and Sir Patrick who are just peas in a pod, good pals who turn their respective relationships in each play into magic. You can’t get enough of them.

At the party, both Sirs Ian and Patrick asked me the same question when I told them I’d say through the two plays: “Are you exhausted?” To which I replied, “Aren’t you? You were in them.” They were not, because, you know, they’re X Men.