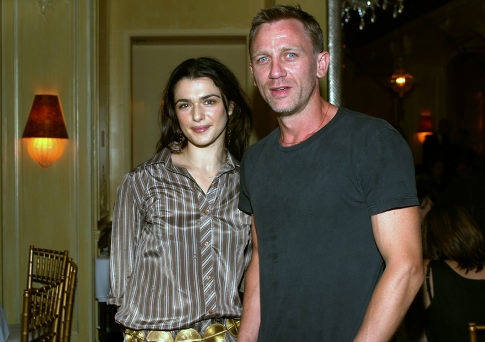 Wow! What a night on Broadway for Harold Pinter’s “Betrayal.” Before Daniel Craig, his Oscar winning wife Rachel Weisz, and Rafe Spall could even get on the stage of the Ethel Barrymore Theater you had to check out the audience. Bruce Springsteen and Patti Scialfa sitting with Steven Spielberg and Kate Capshaw; Steven Soderbergh and wife Jules Asner with Julia Roberts and husband Danny Moder; former spouses Julie Andrews and Tony Walton; Marlo Thomas with Elaine May and Stanley Donen; Carol Kane in front of them; “Moneyball” director Bennett Miller, and Aaron Sorkin front and center, near Ellen Barkin. Bobby Cannavale with Rose Byrne, and Patricia Clarkson looking screen sirenish as usual. Also in the house: Emily Mortimer and Alessandro Nivola, plus “Skyfall” director Sam Mendes, Sir Ian McKellen, and publishing royalty Vanity Fair’s Graydon Carter and Vogue’s Anna Wintour– sitting on opposite sides of the theater.

Clearly this was not just another night on Broadway.

Mike Nichols directed this revival of “Betrayal.” The New York Times didn’t like it but everyone else did. As Elaine May, Nichols’ long time friend and partner, said to me after the show: “Who else could get laughs out of Harold Pinter?” Indeed, Nichols found the much needed humor in “Betrayal” that now gives it humanity as well as fierceness.

Producer Scott Rudin has a massive hit. I’m sure he wishes it could play past January, when the limited run ends. Premium tickets are selling for up to $500.

Craig and Weisz play a married couple, Emma and Robert. Rafe Spall plays their best friend, Jerry. His wife is unseen on stage, and Jerry– we learn instantly–has had a seven year affair with Emma. He thinks Robert hasn’t known about it. And then Pinter pulls the story off like layers of an onion. Only he does it backwards, beginning two years after the affair and working his way back to its inception. It’s short, under 100 minutes, and without an intermission.

Weisz is a proven entity, and she’s excellent as Emma. Spall is interesting choice. This production introduces him to Broadway audiences. But I think it’s Daniel Craig who’s the focus of much of the attention. Most people know him as James Bond. Four years ago he appeared in a two hander called “A Steady Rain” with Hugh Jackman.

Craig was a surprise then, and he is now. He’s extremely comfortable on stage and seems nothing like stoic Bond. When I asked him if playing Bond was a different acting muscle, he surprised me again. “No,” he said. “It’s the same. It’s all acting. I just try to be honest.” It works.