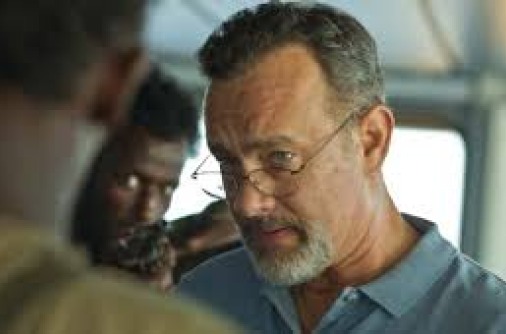 Tom Hanks is on a roll right now. He’s got “Captain Phillips” in theaters, well reviewed, good box office, Oscar buzz. Coming in a few weeks: “Saving Mr. Banks,” much anticipated, with Emma Thompson, on how Walt Disney made “Mary Poppins” into a movie musical.

But this morning I saw a casting call for a new Hanks movie. It’s based on Dave Eggers’ novel “A Hologram for the King.” Considering that Hanks has two big movies in awards contention, right away it doesn’t sound good: he’s supposed to be shooting from January through April in Dubai, Abu Dhabi, Saudi Arabia, and Germany.

As far as I know, Peggy Siegal does not do Oscar screenings in any of those places. Sony (Phillips) and Disney (Banks) must be sweating this one. You can’t do an effective Oscar campaign that far away from New York or L.A.

And then there’s the description of this movie. (I know, it’s based on a novel, but things change): Alan Clay has been invited to the Kingdom of Saudi Arabia on business, eager for his company to make an IT presentation to the King. At his disposal is the cheerfully opinionated and
often unnerving YOUSEF. In the process of waiting for the King, he meets and falls in love with a Saudi surgeon whose beauty and calming influence he finds intoxicating…

And here are the descriptions of those characters:

YOUSEF Late 20s – early 30s, a chubby (not too tall) Saudi wearing a cream-white thobe (robe) and
smoking a thin cigarette, he is the driver/guide for American businessman, Alan Clay who has come to
the Kingdom of Saudi Arabia to make an IT presentation to the King. Breezy, forthright, with a sense
of humor and a playful side, Yousef is a Muslim, with a casual approach to potentially alarming
situations that has Alan a bit unnerved. Nonetheless, the two get along famously, and Yousef is more
than willing to have Alan join him at his family home in the desert when he must flee for life…

DR. ZAHRA HAKEM Female, Saudi, around mid-late 40s to early 50s, with a peculiar beauty and
warmly charismatic persona, she is an intriguingly complex woman, in the throes of a difficult divorce.
A surgeon, she treats Alan when he comes to the hospital regarding a bleeding cyst on his back.
Reassuring, grounded and genuinely concerned for Alan’s peace of mind, she makes him understand
that the cyst is benign. Later, when he suffers a panic attack and it is learned that the cyst must be
excised, Zahra performs the operation. A strong bond forms between the two that soon blossoms into
romance. The chemistry between the two is palpable and Alan is soon making plans to stay in Saudi
Arabia indefinitely…

The “bleeding cyst” is considered a new “meet cute” in Hollywood. “A Hologram for the King” is written and directed by Tom Twyker. He gave us the incomprehensibly interesting “Cloud Atlas” a couple of years ago for the Wachowskis, starring Tom Hanks. No one understood it, but everyone admired it.