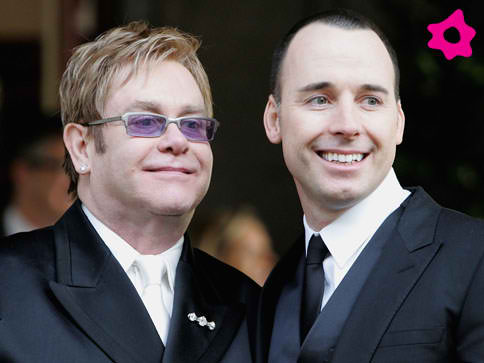 Monday night at Craig’s, by far the hottest restaurant in West Hollywood and where the stars go to dine on comfort food: Sir Elton John and partner David Furnish celebrated the release of Elton’s magnificent new album “The Diving Board” with two superstar guests: Lady Gaga and Johnny Depp. (Also at Craig’s last night: Fred Durst of Limp Bizkit.)

This may have been the biggest star wattage per square inch (or however it would be calculated) in some time. They sat in a secluded banquette with Gaga between David and Elton, and Depp to Elton’s left. Gaga wore a large flowing pink gown with a gigantic blond wig right out of Marie Antoinette. “Actually it’s two wigs,” she told me after I’d made it past the four huge bodyguards in tow.

I did not check their orders. But I do know that Craig’s famous truffled-oiled fried chicken with mashed potatoes and spinach was consumed. It’s the hot spot’s signature dish.

So what was going on? We talked about “The Diving Board,” Elton’s first solo album in 7 years (not counting “The Union” with Leon Russell). The album is released in the U.S. today and it’s already causing a stir. If it’s not nominated for Album of the Year at this year’s Grammys, something is very very wrong.

I was waxing on and on about it until Gaga. who was very amusing, said: “You know, we went to the listening party. I know you think we’re just  a pop star and an actor but we did get invited.”

Gaga then showed David, Elton and Johnny– and yours truly by default — a picture of her album cover on her iPhone. It’s a collaboration with famed artist Jeff Koons, and quite stunning. She also told us a story about going to play at the original Cutting Room in New York, and realizing that she looked just like Amy Winehouse. I think that’s when she went blonde.

Johnny Depp mostly listened, and was incredibly polite. As a musician I think  he was taking it all in, too.

Meanwhile, a table of twelve people in their 30s, almost all from the record industry, were celebrating a birthday at a long table that ran perpendicular to this star setting. Somehow they kept their cool. But it was probably a very memorable night.

And that’s a Monday night in La La Land at Craig’s. It reminded me of the old Mondays at Morton’s from the 1980s.

PS David showed me pictures of his and Elton’s two little boys, Elijah and Zachary. They are very very cute. And he did tell me that their Elton John AIDS Foundation has just gotten a huge donation in the United Kingdom to help them keep battling AIDS and various diseases. Bravo!