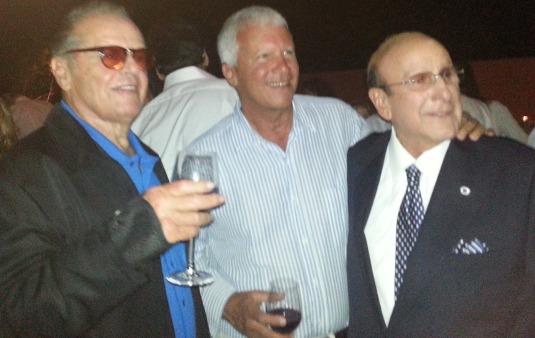 EXCLUSIVE: Clive Davis came to the Hamptons yesterday and was treated like visiting royalty. Davis doesn’t often get out to the South Fork of Long Island. He spends his summers divided between Manhattan and a country house in Westchester County. So his appearance at the fabled East Hampton Library’s Author’s Night, to sign copes of his memoir “The Soundtrack of My Life,” merited a special dinner party. He got one courtesy of uber art dealer Larry Gagosian, who invited about 120 friends to his famed home, Toad Hall, a piece of stunning Charles Gwathmey architecture set on 26 acres in tony Further Lane.

How hot was this invite? Well no less than Jack Nicholson crashed the proceedings. The two time Oscar winner, who lives in Los Angeles, heard what was going on and just popped in. I asked what brought him to New York and he said, “Family stuff” without elaboration. He was charming and rascally, raising a glass of wine to Clive and chatting up old friends like Anjelica Huston, with whom he used to live, and Sir Paul McCartney.

Yes, McCartney arrived with wife Nancy Shevell and her son college student son, from their own home just around the corner. Paul told me his new album will come out before the end of the year. We talked about his son, James, who is on the road touring and playing his own songs. Paul is immensely proud of him. “I told him, you’ve got to get out there and do it. And he has. He’s finding his way.”

McCartney also talked, with a big grin, about his 9 year old daughter, Beatrice. And he got to meet the 20 year old grandson of legendary Beatles producer George Martin.

“You’re the grandson?” Sir Paul asked, astonished. McCartney was about 20 when he started working with George Martin. Time, you know, flies.

The other guests were pretty swell, too, including Jon Bon Jovi and wife Dorothea, Kim Garfunkel (wife of Art) with their 22 year old son James. Where is Artie, I asked? “He’s walking in Greece,” Kim replied. As one does.

The two long tables of diners, perched in Gagosian’s aerie above the Gwathmey house, also included Clive’s attorney sons Fred Davis and Douglas Davis, grandsons, daughters-in-law, and old friends like movie producer Roger Birnbaum who traded stories with Clive from when Birnbaum worked for the music biz legend at Arista Records in the 1970s. Everyone dined on an elaborate buffet of rib eye steak, barbecued chicken, summer salads, and make -your own-sundaes.

Gagosian, a few people noted, was incredibly gracious, letting the guests roam around and see his usual art collection. It included a wonderful piece by Damien Hirst called “The Hat Makes the Man” plus a huge silver Jeff Koons standing Mickey Mouse, and a surprising fiberglass encased shark hung from the living room ceiling. There was also a Steinway baby grand piano adorned with blue butterflies, perfect for Elton John.

Many toasts and laughs later, Clive headed back to New York, McCartney was heard discussing brush strokes on a painting Gagosian showed him. Anjelica Huston, always a knock out, told me her about to be published memoir is just part 1. She’s working on a second volume now. (I’ve read the first part; it’s terrific.)

I did take the picture that goes with this story. It wasn’t easy since Jack was more skittish than the panthers I photographed on a safari. We were afraid to use the flash and scare him away. But when he was asked, he said, “For Clive, yeah.”