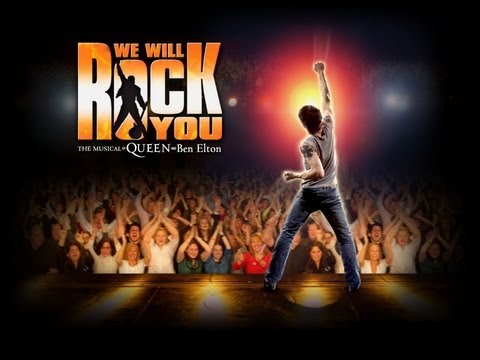 Why should we be left out? Hot on the news that there’s no one to play Freddie Mercury in his own biopic– Sacha Baron Cohen is out–comes news of a Queen musical in the U.S. An American tour of the West End’s “We Will Rock You” is headed here momentarily. The show opens in Baltimore on October 15th and will travel around the country before arriving on Broadway. There’s no New York date yet, but my guess would be next summer, after the Tony Awards. “We Will Rock You” has played in the West End for 12 years, sold 9 zillion tickets, and sent many hundreds of thousands of fans out onto the streets singing “Scaramouche, Scaramouche, can you do the Fandango?” Of course, there is a character named Scaramouche in the show, ‘natch. The cast features The cast features Brian Justin Crum as Galileo, Ruby Lewis as Scaramouche, Jacqueline Arnold as Killer Queen, P.J. Griffith as Kashoggi, Ryan Knowles as Pop, Erica Peck as Oz and Jared Zirilli as Britney.