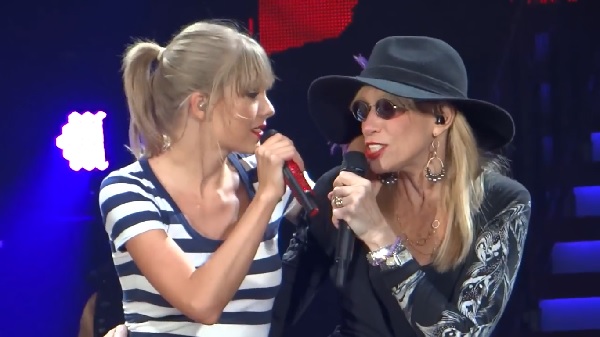 I just spoke to Carly Simon, who’s back on Martha’a Vineyard after her triumphant appearance with Taylor Swift the other night at Foxboro Stadium. I asked Carly how it all came about. She said, “Taylor’s manager called and asked if I’d come up there. I said yes right away. I didn’t even think about it. Taylor’s parents told me later that the music she listened to the most when she was just starting out was mine. I was thrilled.”

The pair performed “You’re So Vain” in front of 55,000 people– despite Simon’s notorious stage fright. But she says “I loved doing it. I could do it every night. I loved not being the focus of the attention.” And clearly, the appearance caused a sensation.

Simon, by the way, say she’s very sorry she wasn’t included in the recent Boston Strong concert for the bombing survivors. “I would have done it and wanted to,” she said. “Steven Tyler called me later and asked me why I wasn’t there. He realized it had been an oversight.”

Simon lives on Martha’s Vineyard but commutes to Boston and New York. She is keen on doing charity shows when they’re appropriate. Meantime she’s writing her book, a memoir that should come out in 2014. And a music project is cooking that I will tell you about shortly.