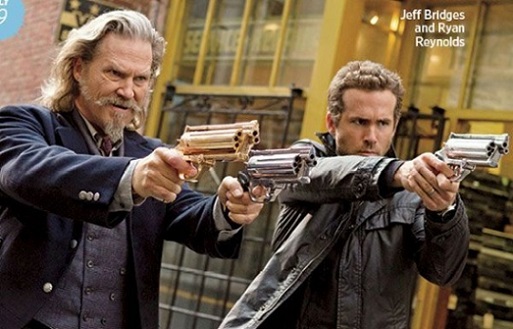 Get ready because this weekend is going to be some weird blood bath at the box office. It’s Wednesday morning and things don’t look so good for Friday. First the good news: wherever I go, “The Conjuring” is mentioned as a surprise hit. Warner Bros.’ entry into the “Paranormal Activity” field cost $13 million to make, and maybe $25 million all-in. Vera Farmiga, one of our favorite actresses, is the star. “The Conjuring” also has a 90% on rottentomatoes.com among critics and bloggers. That should help.

On the downside, three movies that will vie for lower rungs: “RIPD,” “Red 2,” and “Girl Most Likely,” which was formerly known as “Imogene.” I liked “Imogene” when I saw it in Toronto. But since its name change and acquisition by Roadside Attractions, things have gone downhill. The RT score is only 18% this morning, and it’s been as low as 14%. Kristen Wiig may have squandered her currency from “Bridesmaids.”

Then there’s “RIPD” which so far has no critics score. Ryan Reynolds and Jeff Bridges star. As amiable as Ryan Reynolds is, and as much of a tabloid magnet as he’s become, he seems destined for a hit TV show. He’s this generation’s Rob Lowe– good looking and funny, but unable to get much going at the movies.

And then there’s “Red 2,” which had a smallish premiere in New York last night. Let’s put it this way: star Helen Mirren made it to the red carpet for the screening but skipped the after party completely. Bruce Willis and Mary Louise Parker each showed up but played it very cool. “Red 2” has a lot of explosions. There’s some good natured joking around. Mirren, aka “The Queen,” returns as the Queen of of hit women, which is always amusing. Catherine Zeta Jones has a too short extended supporting role. John Malkovich is a welcome presence. But the movie feels like a middle chapter, like it’s marking time until the final chapter. And you know that’s coming. “Red 3” will wrap up all the stories. You can feel it now.

And then, slowly making its way into wider release, “Fruitvale Station” is out there winning over audiences. While we were watching “Red 2,” last night at the AMC Lincoln Square, “Fruitvale” was playing to a paid sold out house. Both movies ended around the same time. The “Fruitvale” audience was overwhelmed, and moved. They were the only ones who’d seen a great film last night anywhere in New York.