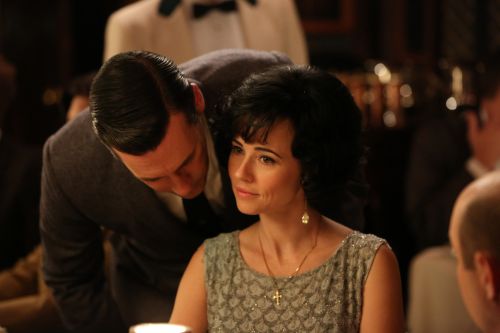 WITH SPOILERS: Yes, last night on “Mad Men” Don Draper finally met his biggest nightmare. It wasn’t his past or any of the secrets he used to fear about his identity. It was his present. Little Sally, not so little anymore, caught him with neighbor Sylvia en flagrante. It’s an image that should put her into permanent therapy or turn her into a revolutionary. Don, the great philanderer, now has a secret with Sally. For the first time in six seasons he looks worried. Terrified, even. The whole Sylvia-affair is about to come crashing in on him. Will Dr. Rosen or Megan find out? And what about Betty? We have two episodes left.

“Mad Men” has notoriously not paid off on many plot twists in the past. Things just happened. But now, with the end near, Matt Weiner seems to be giving plot a little more urgency. Peggy and Pete, now both single, had a major moment together. Little addressed from the first season is the fact that they had a child together, which Peggy gave up for adoption. Now, on a mission with Ted, they’ve reconnected. Where will this lead? And Ted: obviously Weiner likes him and we do too. But now that we’ve met his family, you know he’s not going to leave them.

“Favors” (the episode title) had no Joan and little Roger. But we did get a little more Ben Benson, who’s gay (no surprise) and on the move. I still think he’s aiming for the Harry Hamlin character. And Bob has some kind of knowledge or past with Manuel, the man servant he assigned to Pete’s mother. She’s either actually sleeping with Manuel or fantasizing about it. I’m more worried about Pete’s hair.

And then there’s Megan. She is really out of it. Clueless. I fear for everyone when she wakes up to what’s going on around her. She and Dr. Rosen and maybe Henry Francis make me think Season 6 will end with a cliffhanger–“Who Shot Don Draper?”