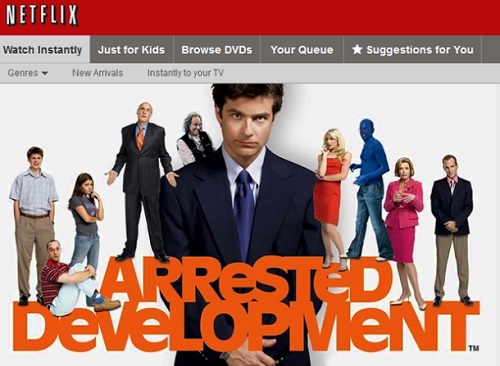 CLICK ON TODAY’S HEADLINES JUST OVER HERE– AT RIGHT–

One of the many pleasures of last night’s Mel Brooks AFI tribute was meeting “Arrested Development” creator Mitch Hurwitz. He was sitting at the same table as Netflix chief Ted Sarandos. And the two very creative guys told me that, if they can pull everyone together again, “Arrested Development” will be back on Netflix with  more episodes.

Their recent launch of 15 new episodes is a big hit, Sarandos says. Netflix doesn’t release figures or ratings, but suffice to say that the two guys are very very happy with the experiment that brought the cult series back.

“And to think the ratings that cancelled it were like 7 million,” Hurwitz said of Fox’s cancellation of the show a couple of years ago. “Now everyone would kill for that number.”

Take the “Arrested Development” poll on the home page.

Hurwitz told me that making the new series was a total pleasure. “Jason Bateman only had three weeks for us. He filmed all his scenes at once. And he was great. Michael Cera is a star. Jessica Walter– how funny is she? That she would do the things we ask her–” Hurwitz had praise for the whole cast, believe me.

We talked about binge viewing. Initially fans were skeptical of the first few new episodes. But then watching the whole season to the end was very satisfying. “You saw how the last episodes answered the first ones,” Hurwitz said. “We never tried anything like that before. But it worked.”

Sarandos is very stoked about “AD,” “House of Cards,” and the new Netflix series coming imminently– “Orange is the New Black” from “Weeds” creator Jenji Kohan. I am too. I have my Roku box all set and ready to go! Nice guys by the way.

Want more “Arrested Development” news? Sign up for the daily Showbiz411 at the bottom of this page or on the home page.