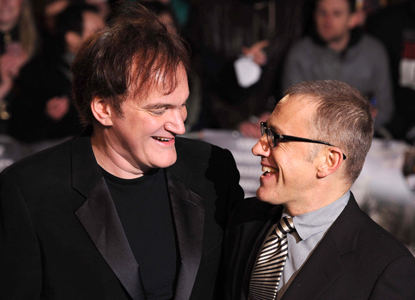 EXCLUSIVE: Two time Oscar winner had the shock of his life tonight in Cannes. While he and fellow juror Daniel Auteil were being interviewed live on talk show “Grand Journal,” an audience member shot a gun twice into the air–but kind of in the direction of Auteil. The gunman was wrestled to the ground quickly but not before shouting “I have a grenade.” No one was hurt and Waltz joined other diners immediately after at the Hotel duCap’s Eden Roc restaurant for an annual A list dinner hosted by publisher and filmmaker Charles Finch.

Waltz spoke to me exclusively at the dinner. He didn’t seem much fazed by what had happened, and hadn’t told anyone at dinner until I asked him. Maybe he was in shock. He recounted the events for me coolly. “I had a very good bodyguard who moved fast and got me out of there,” he said. Auteil did too.

The gunman was apprehended. “He was shooting blanks,” Waltz said. “We thought maybe it was a joke or something to do with Occupy Cannes. I think he was just crazy.”

The shooting was the second strange occurrence in two days in Cannes. It came after the much discussed Chopard jewelry heist, in which the famed jeweler reported that $1.4 million worth of their was ice was taken from the Novotel– an off the beaten track business hotel not on the Croisette. Reports are that thieves sawed through an adjoining room and removed an entire safe.

The Chopard story was the talk of the Finch dinner which counted luminaries like famed directors Bernardo Bertolucci and Wim Wenders, Harvey Weinstein, Liv Tyler, Waltz, rock star Bryan Ferry, director Paul Haggis, super producers Jeremyy Thomas, Cassian Elwes, and Eric Fellner, and so on. Many wondered why Chopard would have jewelry in a safe at the unglamorous Novotel in the first place. The answers were unclear, the gossips wagged that the whole thing sounded like a p.r. stunt.

The beloved head of Chopard, Caroline Scheufele, told the diners at her table that it was good p.r. but that it wasn’t a stunt.