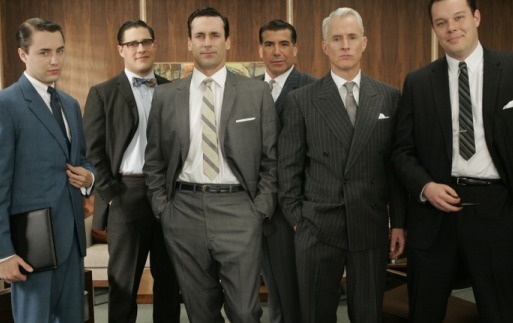 “Mad Men” just finished up its two hour premiere of Season 6. By Monday afternoon we’ll know many people watched. Was it the biggest audience ever? In the meantime, “The Doorway” was all about death– Roger Sterling’s mother, the unseen shoeshine guy, Don’s dreams and his suicide- looking ad for Royal Hawaiian.

It’s the Christmas week of 1967, and Megan is now on a soap opera called “To Have and to Hold.” Jeff Hunter– the famed William Morris agent- represents her. (He’s a real person, a famously great agent, and he is very much alive in 2013.) Megan and Don are visiting the Royal Hawaiian Hotel in Honolulu. Don stands up for a private getting married and the two men accidentally swap Army lighters. The PFC is named Dinkins, and now Don has once again traded away his identity.

I don’t want to give too much away. But Don is reading “The Inferno” on the beach. The ad he comes up with for Royal Hawaiian suggests someone has committed suicide by walking into the water. “A Star is Born” is mentioned. This is clearly a riff on how Don feels about Megan’s success. And we see later that Don has not changed his old ways. I’m afraid to say that he will never change his bad ways. He is still smoking, boozing, and philandering. It doesn’t look so good for him.

Elsewhere Roger Sterling’s wealthy 91 year old mother dies. She’s been living in grandeur likely on Fifth or Park Avenue. John Slattery remains astounding as Roger, who doesn’t cry until almost the end of the show.  He’s also seeing his shrink. And makes a Freudian slip at his mother’s service when he exclaims, without irony, “This is my funeral.”

But it’s more like Don’s funeral. He vomits after too much drinking at the Sterling home, realizing his existential curse– after two wives and three children he is still alone.

Some notes: Don makes a friend of a Jewish doctor. The doctor’s knockout wife is played Linda Cardellini, wow, from “ER” and “Freaks and “Geeks.” She’s a keeper. January Jones’s Betty shocks Henry with dirty talk, ignores her own child, but seems to be chasing her own youth in the East Village. Peggy is doing very well at her new firm. It doesn’t look like she’s coming back. And as someone– maybe Liz Smith– mentioned recently–it seems as though Peggy might be on her way to becoming a version of Mary Wells Lawrence, the first woman who was a titan in advertising.

“Mad Men” always begins slowly, and these two episodes were no exception. Matt Weiner is laying his foundation. And for 1968, we needed to know where everyone was. Because a lot happens in real life, and he can draw from it all.

PS I still have my Koss headphones circa 1970. They were heavy but great, and countless hours were spent between them listening to lots of stuff, especially the Mahavishnu Orchestra. These days, I have two pairs of Grados, a 60 and an 80. But all that talk about Koss made me nostalgic.