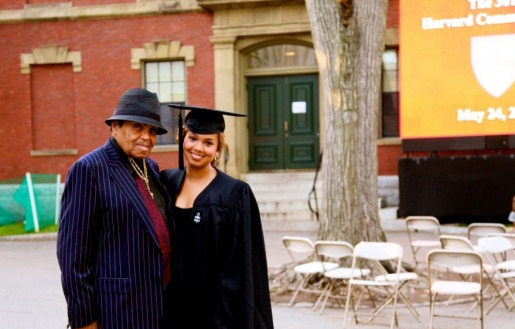 It seemed like a while since we’d heard from the Jackson family. But with the AEG wrongful death trial, the calls are coming in. First off: last November, my sources say, papa Joe Jackson had not one but four strokes in one day. Somehow he survived them all intact. Since then, I am told, he’s been keeping a low profile in Las Vegas.

“His voice sounds weak on the phone,” a source tells me. “But he’s ok.” Before she married a nine years younger Arab billionaire, Janet Jackson visited her father. But otherwise? “She’s gone,” says my source. “She married a billionaire. They’ve got houses in three countries. She’s spending time in the Middle East. She’s become a Muslim.”

The family, they say, is still talking about the Harvard graduation last May 2012 of Randy’s daughter Stevanna. There were some reports at the time on blogs. But the only family member who attended the graduation, this source says, was Joseph Jackson. Stevanna could turn out to the Marilyn Munster of the large Jackson clan. She’s bright and wants to be a movie producer. The family is hopeful that she can be a role model for Paris Jackson, who’s 15 and wanting to get into the entertainment world.

There’s still a rift among the Jacksons concerning last summer’s escapade in which Katherine Jackson was “kidnapped” by Jermaine, Janet, and Randy. Michael’s kids have very little to do with those siblings. And Rebbie Jackson, the oldest sibling, is getting over the death of her husband, Nathaniel. As for La Toya Jackson, it’s not set in cement that she’ll be agenting or managing Paris and Prince much longer. The Jacksons are still like a chess game in motion apparently.