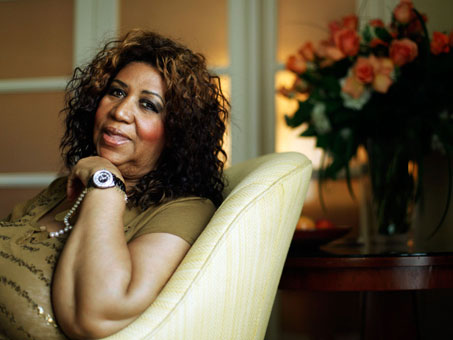 EXCLUSIVE What a birthday night for Miss Aretha Franklin! First the cast of the “Motown” musical already selling out to the rafters serenaded her at the end of the Monday night show. The whole cast and the audience sang the Stevie Wonder “Happy Birthday” song to the Queen of Soul, who brought about a dozen guests. She herself sang along with the show full of Motown hits. The cast didn’t even know she was in the audience until the intermission. Then after the show many members of the cast– as well as the legendary Berry Gordy Jr.– joined Aretha for a swanky birthday party at the Ritz Carlton on Central Park South.

And wait: before the show, Aretha and pals had an Early Bird Supper at one of New York’s very best restaurants– Le Bernardin. This elegant eatery is known for its fish. But Aretha wanted veal scallopini. So she called ahead and they made it for her! Now, this is royalty. She paid the bill herself and couldn’t stop complimenting the cuisine.

Then off to “Motown” where, she told me later, she sang along with the show and kept screaming “The Temps” for the Temptations. “Motown” brings to life many of the Motown stars and their three dozen or so hits. Actors play Stevie Wonder, Marvin Gaye, Smokey Robinson, Mary Wells, Martha Reeves, the original Temptations, Gladys Knight and Michael Jackson. Sadly, no Four Tops. And last night, as Gordy keeps trimming the show, they stopped the Miracles’ number “Tears of a Clown.”

At the Ritz Carlton, Aretha was met by Tony Bennett and his wife Susan, who came to pay their respects. The party was tres elegant. Each guest received a Sylvia Weinstock baked miniature Grammy Award with their name on the faceplate. Aretha’s cake was the most magnificent thing I’ve ever seen, also a Weinstock original. And the guests included friends from New York and Detroit, as well as Rev. Al Sharpton (who’s really unbelievably thin at this point) plus BET’s Debra Lee, the Bennetts, Berry Gordy, the “Motown” cast. Music was provided by a combo led by legendary jazz pianist Mulgrew Miller. There were cakes everywhere. Aretha said, “This is for when everyone finishes their Seder.”