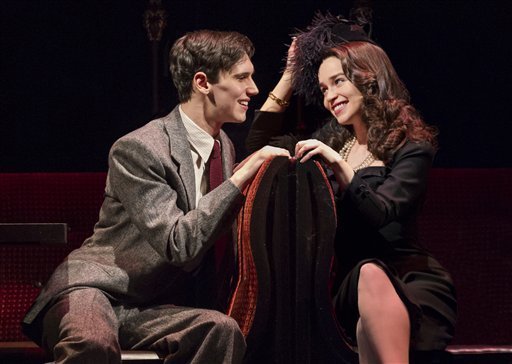 I can’t say Truman Capote is spinning in his grave exactly, but Audrey Hepburn and George Peppard surely are, and Tiffany’s will be disappointed. Last night’s premiere of “Breakfast at Tiffany’s” on Broadway is being panned everywhere., and quite rightly. It’s a missed opportunity certainly. Something about London productions of American ideas. This producer also brought in the hideous musical version of “Ghost.” I wish they would stop right now.

What looks cool in London often comes off wrong here. “Breakfast at Tiffany’s” must have look stark and foreboding in the West End. I’m sure they thought it was Capote wanted. I guess they didn’t watch the movie or think about how New Yorkers– Americans–romanticize these things. So they’ve given us a very cold Breakfast. Urrrgghhh. Emilia Clarke is obviously talented, but she is so miscast as Holly Golightly that it’s kind of shocking. Nearly everyone else is wrong, although I got a kick out of Tony Torn (he lit up the stage) and also liked John Rothman, Suzanne Bertish, Lee Wilkoff. It was a relief to see George Wendt on stage. But oy.

There’s even a scene where the two main characters get naked and take a bath together. It doesn’t help. I wish it did. (There’s a joke in here about throwing out the play with the bath water.)

However: a cat steals the show. He’s a big guy, kind of orange, and so well trained. I just hope this cat doesn’t meet Uggie the Dog or any of the recent movie star animals. He’ll be demanding all sorts of things. He also got the biggest applause last night.

In the audience: Debbie Harry of Blondie fame looked so elegant, and she even spoke at the swanky after party at the Edison Ballroom. Kudos to Peter Kaczorowski, Derek McLane, and Colleen Atwood for making the show look so good. But I have questions about director Sean Mathias that can’t be answered here.

I did keep hearing this song in my head: