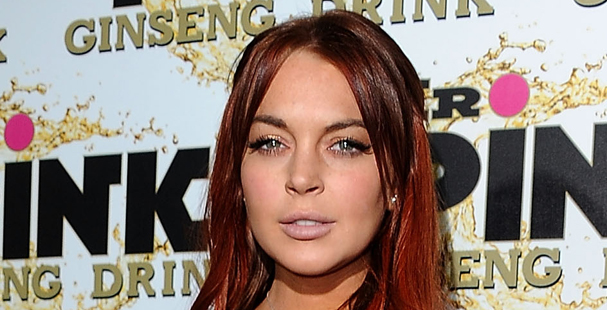 EXCLUSIVE Lindsay Lohan — and some other B list celebs like LaToya Jackson– has found a new source of money from a China billionaire transplanted to Los Angeles. On Monday morning, Lohan Tweeted a thank you to  “Mr Pink” for getting her a private plane from New York to her court date in Los Angeles. Mr. Pink is a California-only distributed ginseng drink that is owned, sources tell me, by a Chinese billionaire and former entertainer who has money to burn.

My source says that last fall, Poe Qui Ying Wangsuo of Monterey Park, California– alleged to be the enigmatic owner of Mr Pink–threw a lavish promotional party in Beverly Hills for the product just because he could. Mr Pink, my source says, paid Lohan over $75,000 to come to the product presentation. The company also paid $21,000 for her private plane to LA. That’s also what he paid on Monday morning to fly Lohan in for the court date.

All the money is negligible to Wangsuo. A source says: “He spent half a million dollars for the party, and $3 million to date to launch Mr Pink, and it’s only available in California. They just want to go out and party. [As far as marketing and selling a new drink] they have no idea what they’re doing.”

Mr. Pink is owned by Wangsuo but run by him and three men under the name Kings Investment Group LLC. They are all based in LA. Their names are Artur Arenyan, Kaine Wen, and Farhad Novanian. Arenyan, who works in the beverage business, got Wang Sou into Mr Pink, I am told. 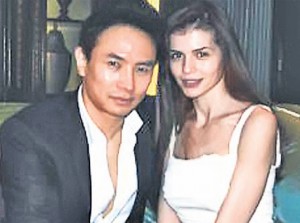 Wangsuo  loves celebrities, my sources say. To rub shoulders with the rich and famous, he donated $35,800to the Obama Victory Fund in 2011 at a Hollywood fundraiser. But Wangsou keeps a low profile. He leaves the high life to his Romanian girlfriend, known as Monica Gabor. But he counts among his pals Hockey legend Wayne Gretzky, with whom Wangsuo hoped to launch Mr Pink in Canada.

Lohan’s involvement is key.  With little work and bills to pay, she must rely on her notoriety to make money. Mr Pink doesn’t seem to mind. It gets his brand attention even if you can only buy it on the west coast. “It’s a vanity product,” says a source, “It’s not meant to be a success. Wangsuo has $2.7 billion. He wants to party and be with celebrities.”

After Lohan arrived in LA this morning, she Tweeted both Mr Pink and WangSou’s party planner, Sheeraz Hasan.

Hasan has a couple of websites including one called www.hollywood.tv. (Hasan didn’t respond to my emails.)  However, one look at the website and you see that Hasan has had his picture taken with every living celebrity and famous politician. Most of the shots look like standard set ups– he waits on lines, has a standard picture taken with Barack Obama, Hillary Clinton and then posts the pictures to make it seem like he’s their best friend. Maybe he is, who knows? I won’t deny him those relationships.

According to his website, Sheeraz Hasan’s customized services include: Creating the coolness factor for your brand, something called Paparazzi On Call, and Celebrity Booking for Private Engagements, parties, events, etc. He also gives Investment Advice. You’ll be happy to know that:

“Sheeraz, Inc. has the Hollywood paparazzi on direct dial any time of the day. Whether you happen to be in Los Angeles, London, or Miami, we are able to create a paparazzi media frenzy to highlight and publicize your profile to the mass media. This service is available 24 hours a day.”
And Hollywood.tv– it’s sort of a lower rent version of TMZ (that’s like penny slots vs. nickel slots).

Prince, Paris, and Blanket probably didn’t realize when they endorsed Mr. Pink that it’s tied to Hollywood.tv, and that the site keeps up a famous amateur video of their father being removed by ambulance from their house after he died.