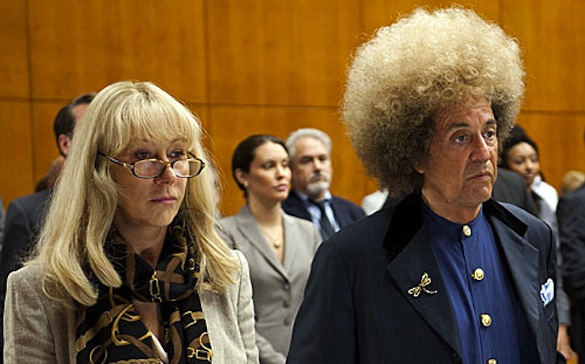 The screening and the dinner were so booming that Oscar winning “Argo” screenwriter Chris Terrio only found out toward the end of dinner that NY Post gossipeuse Cindy Adams’s “date” for the evening was former Canadian ambassador to Iran Kenneth Taylor. Yes, that Ken Taylor, who was responsible for the American hostages stuck in the Canadian embassy to leave for the US undetected– the “Argo” story.

When we told Terrio that Taylor was in the room, some distance away, he demurred. “It might be a little weird, especially in a public place,” said Terrio, who didn’t want to cause a scene. Apparently Taylor and “Argo” author Tony Mendez have different takes on what went down in Iran in 1979. Terrio didn’t want to get in the middle of it. Ah, but a missed opportunity!

You know movies and reality don’t mix. When I asked Pacino if he thought Spector might see the movie in prison, he replied: “I hope not. I don’t think they get HBO.” But Spector should be happy. He’s never seemed more understandable, in a crazy way.

Meanwhile: David Mamet, who wrote and directed “Phil Spector,” has bronchitis and couldn’t make the premiere. But what a great film he and Levinson and the cast have made. Pacino is a triumph as Spector during his first trial for allegedly murdering actress Lana Clarkson. Even though I am personally convinced that Spector killed Clarkson– and a jury was too– Pacino brings a sympathy to Spector that sheds some light on his enigmatic, crazy life. This isn’t to say that it’s not sympathetic to Clarkson. But this movie tells the story of how the defense brought their case.

In that light, Helen Mirren is equally great as Linda Baden, the lawyer who got Spector a hung jury for his first trial. (Baden was there with husbamd Michael Baden, the famous medical examiner.) Originally Bette Midler was supposed to play Baden. But she dropped out. and Mirren stepped in. Midler looks more like Baden, but Mirren as usual inhabits the character. She and Pacino have an essential rapport that keeps the movie–described as an imagined drama about the lawyer-client friendship and the trial–in place. Mamet’s screenplay is also so rich and textured, it’s like a stage drama at times– in the best way.

PS Levinson spent a chunk of dinner chatting with Chase. Barry is getting ready to shoot his “Whitey Bulger” movie with Johnny Depp. He’s also looking forward to his delayed but getting in shape musical of “Diner” coming to Broadway for 2014.

Also — across the street at the Hudson Hotel, the great indie movie “The Sapphires” got a splendid kick off. More on that…