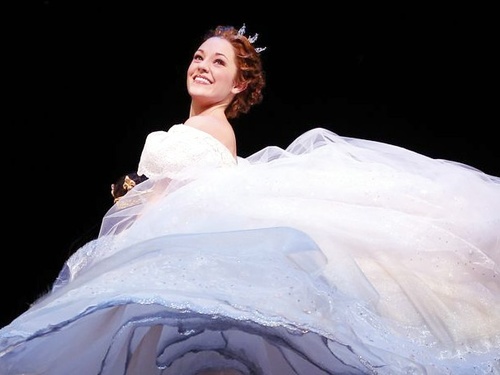 Maybe you’ve seen the ads for Rodgers and Hammerstein’s “Cinderella.” They are everywhere, without fail. That’s because putting this show on Broadway is a first. “Cinderella” was written for TV in 1957, and then remade a couple of times. The most famous version was with Lesley Ann Warren. Now it comes to Broadway as a live show at last. I didn’t know what it would be: for children? moldy? something out of the 50s?

Well, the big surprise is that “Cinderella” has been refashioned for 2013. Douglas Carter Beane took a hacksaw to the old script and made the new one sassy, bouncy, and a little snarky. He’s still retained the romantic core. But let’s face it. We know this story by heart. And by now, to tell it straight would send adults to the sleeping bags. So Beane has inserted humor and twists, made everyone involved a little savvy, and wiser. By the time the second act finishes, you’re even feeling sympathetic toward the evil Stepmother (played to hilarious effect by the great Harriet Harris).

What this creative team did is to build a new structure of a romantic comedy around the Rodgers and Hammerstein score. The music is so lush and beautiful, the songs so catchy and sophisticated, you don’t want to do anything to them. So they stand, un-tweaked, like a great landmark building that now has a park some rides, and a fountain.

The cast is top notch. Harriet Harris and Peter Bartlett (Sebastian, who’s been running the Palace for dumb but lovable Prince Topher) are comic villains with exquisite timing. I do think Bartlett–known to TV viewers as the long suffering butler on “One Life to Live”–is playing his version of Maggic Smith as the Dowager Countess. Each of these actors tries to steal the show, and they come out to a tie.

The serious Broadway types are star Laura Osnes as Cinderella, Santino Fontana as Topher, and the amazing Victoria Clark who plays Crazy Marie and the Good Fairy. The other stars include director Mark Brokaw and costume designer William Ivey Long. “Cinderella” is worth seeing just for Long’s jaw dropping dresses, and for the sleight of hand he achieves in what can only be described as magical costume changes.

Of course, last night’s crowd loved the show–including Anjelica Huston, Cynthia Nixon and Christine Marinoni, Kyra Sedgwick, Megan Hilty and Cady Huffman. Producers Roy Furman and his daughter Jill made the opening curtain and accepted condolences for the untimely death of Roy’s wife and Jill’s beloved mother, Frieda, who passed away suddenly February 19th after battling pancreatic cancer. She was a great lady, much too young to leave us, and will be sorely missed by everyone in the theater community.

Listen– get your “Cinderella” tickets now. It’s going to be a massive hit. You know these people know what they’re doing: the curtain call included the understudies, the puppeteers, the writers, producers, director, crew and a large photo of Richard Rodgers and Oscar Hammerstein. You really felt like every i was dotted and every t was crossed. A really enjoyable, wonderfully entertaining night in the theater.