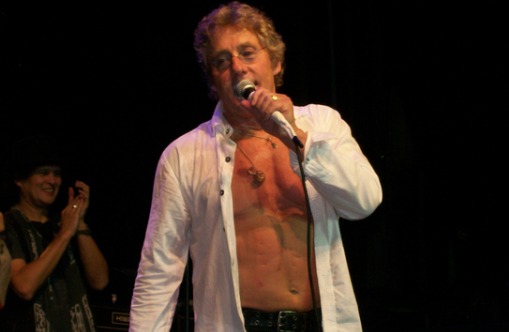 I think the combined ages of all the rockers I saw last night was well over 2,000. So the lesson we learn is, the older the better. Elvis Costello and the Imposters, followed by The Who, rocked the 5,000 sear Theater at Madison Square Garden last for Memorial Sloan Kettering’s Teen Cancer Fund. The Who’s eternally youthful Roger Daltrey is very involved with this charity, and spoke eloquently about it at the end of the evening. What he didn’t say: it was the eve of his 69th birthday. God bless!

But let’s cut to the chase: everyone else spoke eloquently with guitars, drums, and keyboards. Pete Townshend was simply remarkable as he, Daltrey, and the current model of The Who (which includes Townshend’s brother Simon and Ringo Starr’s on Zack Starkey) demolished the stage with a greatest hits show. From “Behind Blue Eyes” to the soaring double finale of “Baba O’Reilly” and “Won’t Get Fooled Again,” these guys were earth shaking. And to see them in such a small theater was the great treat.

I had missed The Who last fall on tour, and then at that 12-12-12 mega thing at MSG. They were worth the wait. Daltrey looks 50 tops up close. He still can’t keep a shirt quite on, but he knows what shape he’s in. He could sell millions of fitness and diet books. Townshend also looks swell. He swings his axe like it’s 1970. This iteration of The Who is as supple as ever. Digging way back for “The Kids Are Alright” and “Pinball Wizard,” the group keeps it tight. There’s no excess. And Daltrey gets to shine ever more on “Love, Reign O’er Me.” It gave me chills.

Costello and the Imposters are just four people– the star, plus Steve Nieve, Davey Faragher, and Pete Thomas. They also played a greatest hits set, blazing through 45 minutes like a heat seeking missile. How well the hits hold up– from “Alison” to “High Fidelity,” “Lipstick Vogue,” “Pump it Up,” “Watching the Detectives,” “Everyday I Write the Book,” to “What’s So Funny (‘Bout Peace, Love and Understanding),” and a terrific nod to The Who on “Substitute.”

EC and co. don’t even stop–it’s just an old fashioned punk rock attack that is vital as it was in 1981. And when Costello sings “Radio Radio” from 1978, warning of the destruction of rock radio and the record business, you can only admire how prescient he was. And no one listened. Radio is still in the hands of such a lot of fools trying to anesthetize the way that we feel.

I’m told Cablevision threw in the theater for free, and that with ticket sales, around $2 million was raised to help teens 13-23 with cancer.