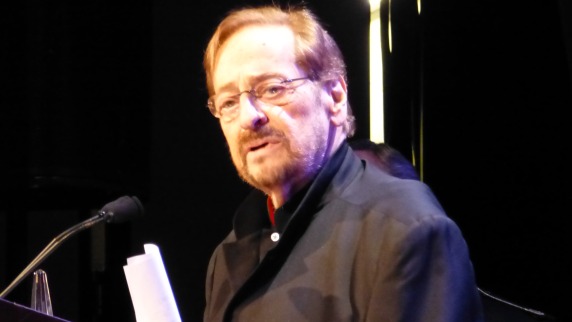 UPDATE midnight Saturday morning: A family member has told me that Phil is “doing well” and should be out of ICU soon.

Earlier: Phil Ramone is not happy this evening that everyone knows he was taken ill yesterday. On other hand, he should be impressed how many people love him and are praying for him. Phil had an aortic aneurysm yesterday, had emergency surgery, and is said to be doing well. Of course, Phil is well known to the world as the legendary producer of Tony Bennett, Billy Joel, Paul Simon, Rod Stewart, and hundreds of others. He is adored in the music community. Just a few weeks ago we all attended the Salvation Army dinner honoring Phil. Aretha Franklin sang for him. It was quite a night.

I still think of Phil drenched in sweat two summers ago, recording Aretha and Tony in a studio where Aretha had had the air conditioning turned off. It was at least 150 degrees in there. But Phil got an amazing session out of it. He’s one of our heroes. And he better get well fast– he has to produce the Songwriters Hall of Fame dinner on June 13th with Aerosmith, Foreigner, Petula Clark and a dozen guest stars.

Phil has 14 Grammy awards and a resume that will blow your mind. In the 70s, he produced major tracks for Chicago, Phoebe Snow, Barbra Streisand–“Evergreen”– and BJ Thomas– “Raindrops Keep Falling on My Head.” Phoebe’s “Teach Me Tonight” is one of his classics. Phil produced a ton of Sinatra, has worked on everything with Quincy Jones and Richard Perry. His first hits were with Lesley Gore, including “It’s My Party.”

He did that whole Tony Bennett “Duets II” record, and has so many projects lined up. There’s no time to be sick, Phil!