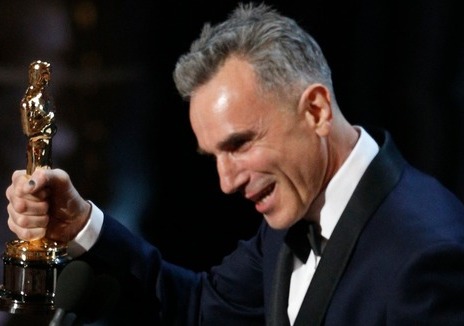 You know what people say: first kid, you’re worried about them all the time. Second one, you ease up slightly. Third one? They’re on their own. And so it was last night at Vanity Fair’s jam-packed star-studded A list mega party at the Sunset Towers. Daniel Day Lewis set his third Oscar statue–a record, you kn0w–down on a pillow on a couch he stood in front of.

“Where is the Oscar?” I asked DDL. “He’s resting,” the newly minted Oscar winner said, pointing to the gold statue lying on a small silk couch pillow next to his wife Rebecca Miller. “He’s relaxing.”

DDL was doing anything but, his eyes welling up as each well wisher came to congratulate him from pal Robert DeNiro with wife Grace and son Elliott to fellow Oscar winner Christoph Waltz. And everyone wanted to talk to DDL, who is notoriously shy but was hugging anyone who came over last night. Three Oscars is just beyond any actor’s dream.

“Will you do theater next?” I asked Daniel.

“Maybe dinner theater!” he joked. He actually has nothing lined up yet. How do you follow “Lincoln”? Do you win an Oscar for every movie?

Meantime, just to the right, in the next conversation area, Harvey Weinstein was in deep, deep conversation with Judd Apatow and his “This is 40” actress wife Leslie Mann. A project in the future? Who knows? I do know that everyone was asking Harvey about getting Michelle Obama to present Best Picture–a coup, certainly, and one of the classiest moments in Oscar history.

Elsewhere, while the stars ate In-N-Out cheeseburgers, they also grouped and talked. Michael Douglas and Catherine Zeta Jones settled in with Tim Burton and Helena Bonham Carter until Quentin Tarantino came and got Burton–whose arm is in a sling–into a big conversation about filmmaking, standing up, with Quentin swaying back and forth, and Tim –this was at 1am–looking he was going to collapse.

At one point the crowd in the main room swelled to a massive wall of people–very tricky to breathe or maneouver around. But oh that is Vanity Fair’s Oscar party. So I headed off to the adjacent room, through a bridge way, where “The Artist” star Jean DuJardin, last year’s Best Actor, was stuck. His English has really improved, so when I asked him if he’d been in touch with Uggie the Dog, DuJardin replied: “He has retired!”

Just over the bridge, there were little rabbit warrens of groups–the “Silver Linings” contingent consisted of David O. Russell, his wife, their various friends, and family, Bradley Cooper and his mother. Russell called out, with a big gesture, “We swept!”– then added, “the Spirit Awards!”

Around the corner was “Godfather” legendary director Francis Ford Coppola, who told me he’s finishing a script for a new movie. “Can’t talk about it yet,” he said. Then to the wood paneled bar in the darkly lit room, where Henry Cavill–soon to be Superman in “Man of Steel” — got into a conversation with Michele Rodriguez, who didn’t realize who Cavill was. Where’s she been? “In Southeast Asia.” Why? “To find my soul,” she replied.

Meantime Cavill. and let’s not cavil: next year he won’t be standing at the bar by himself. He’s a star-in-waiting, a leading man to be. How many women did he bed in “The Tudors” I asked him? “A lot,” he said. “Sounds like fun,” I offered. “It was hard work,” he said seriously.

British actors are very serious, although Henry did say he had fun working for Woody Allen in “To Rome with Love.” He will have to get used to people calling him Superman. But he’s very quick. I did ask whether in this version Lois Lane knows Superman is Clark Kent. And Cavill cavilled: “You’re not getting anything out of me!” he cried. Well played!

And there were so many others. Patricia Clarkson said: “I’ve been here since 4:30!” as she tried to escape the madding crowd around 1am. The party lasted til 2:45am at least. Some went on to Madonna’s “People Who Will Never Get an Oscar” party but most went home. Hugh Jackman, wife Deborra-Lee, “Les Miz” star Samantha Barks and her beautiful older sister Kim, Adrien Brody, Mark Ruffalo– Vanity Fair’s Oscar party is an endless parade. I called it the parade for Liberation Day. Oscar season is now over. Peggy Siegal can sleep. The 2014 campaigns won’t start until May. Yay!