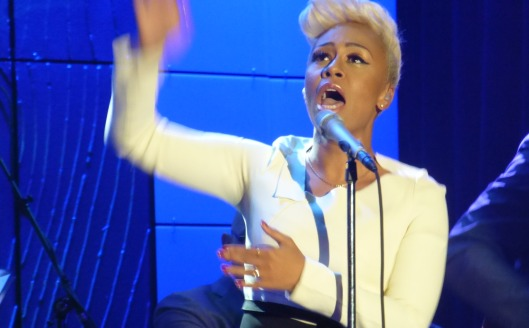 Sir Elton John has chosen Emeli Sande to perform at big Oscar party on February 24th. She’s the Scottish singer who’s about to break as big as Adele here in the US with her album “Our Version of Events.”

I went to see Emeli last night in Hollywood at the Key Club in a showcase sponsored by Pfizer and Chapstick (Viagra joke can be made here). She was absolutely sensational, mind blowing, unique. By accident I’ve seen Emeli sing three times in LA since Saturday and she’s just been outstanding and astouding each time.

Each year Elton gets a cutting edge act to perform at his all star celebrity party set up next to the Pacific Design Center in West Hollywood. Proceeds from the dinner and party benefit his and David Furnish’s Elton John AIDS Foundation, one of the few charities that really achieves its goals and has vanquished AIDS in many parts of the world.

In the past they’ve had Nelly Furtado, the Scissor Sisters, and even Prince at the party. They also get the creme de la creme of celebs, from Sting and Paul McCartney to Hugh Jackman (this year’s co chairman of the dinner) to Sharon Stone and Quincy Jones.

Today in a release Elton called Emeli’s album “a true work of art. I predict that by next year she will be a multiple Grammy winner.”

Indeed, he’s right–the next year is going to be a big, slow build for Emeli. I just hope she can keep calm as her career explodes. I do think people are going to be fighting to get into the EJAF Oscar party to see her– and maybe hear her sing with Elton on at least one song. After hearing her last night, it’s easy to imagine her big soulful voice on one of his many hits.