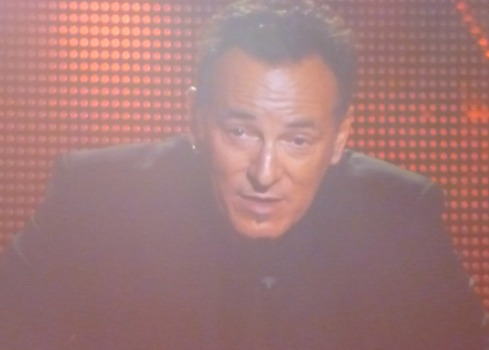 Bruce Springsteen, aided by producer David Foster, waded out into the dinner audience of around 3000 people last night at the L.A. Convention Center and auctioned off a Fender guitar for $250,000 at the annual MusiCares charity dinner. Springsteen, honoree as Person of the Year, first got a clutch of rock stars to sign the high-polished instrument including Sting, Neil Young, Katy Perry, and Elton John. Then he added 1 hour personal guitar lesson and lasagna made by his 87 year old mother, who took a bow from her table.

Tracy Powell, who said she was a mom from Maryland but was born in New Jersey, and was seated in the back half of the cavernous ballroom, shimmied up the Boss in a glittery mini skirt and bought the package for a quarter of a million dollars. And that was before almost two dozen A list musicians, including Springsteen himself and members of the E Street Band, took the stage and sang Bruce’s songs in a knockout two hour show.

Powell’s winning bid also got her a ride in the sidecar of Springsteen’s Harley Davidson, eight tickets and backstage passes to an E Street Band show plus a private tour conducted by the Boss.

Springsteen was accompanied to the show by his wife Patti Scialfa, plus his daughter, mother and cousins, a married couple who he later said “helped us raise our kids.”

They just added to the buzz of the high energy crowd. And wow–what a group! With Jon Stewart as emcee, the annual MusiCares dinner was a memorable one. Although it lacked much in the way of R&B it still had a lot of soul and, curiously, quite a bit of country and blues. There were significant standing ovations for everyone from Sting, who rocked to perfection a muscular “Lonesome Day” to Jackson Browne’s haunting “American Skin (41 Shots).”

The performances ranged from Elton John’s blistering “Streets of Philadelphia” to Neil Young– complete with cheerleades– on “Born in the USA,” Mavis Staples and Zac Brown chanting “My City in Ruins,” and John Legend serenading the audience with “Dancing in the Dark” from a revolving platform in the center of the room. Spanish star Juanes sang “Hungry Heart” bilingually, and Tom Morello added his crazily magnificent guitar to several numbers.

A highlight: Patti Smith singing her famed 1978 hit collaboration with Springsteen, “Because the Night,” which she dedicated to her late husband Fred “Sonic” Smih and to Bruce. Springsteen said later, “Patti, it’s your song.” He added: “I play it almost every night.”

Springsteen spoke eloquently, and with a lot of humor as always, He is one of the great speechifiers. He said of the assembled musicians, “We are a brother and sisterhood of magical fuck-ups.”