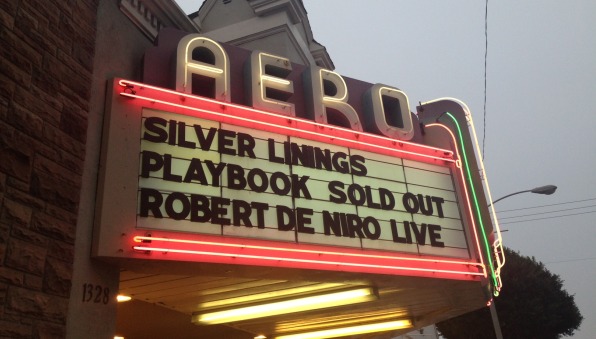 At the Aero, Harvey Weinstein waxed poetic about De Niro to moderator Pete Hammond of Deadline.com: “What made me 20 plus years ago that Bob and Jane Rosenthal his partner from Tribeca came and recruited us to 375 Greenwich and thus it became in a way the independent film capital of the world.   Besides them organizing the Tribeca Film Festival after 9/11 to bring people downtown, he went to every restaurant and encouraged all of us to be better citizens.  From 9/11 to Hurricane Sandy and anything in between, he’s been there.  Unfortunately it’s been 31 years since he won an Oscar.  David, Bradley and Jennifer know that without Bob, the movie wouldn’t be half as good as it is.  He’s the soul of the movie.  So it’s about time he wins again.  He’s the best actor in the world.  And one of the best guys.”

DeNiro is infamous for short answers given with a smile. It’s just his way. When asked about putting his hand-and- footprints into the cement at the Chinese Theater, the Oscar nominee said: “It was fun.  I was with friends, Billy Crystal, Irwin Winkler.  It was fine and fun.” (Somewhere in heaven, Lucy Ricardo was smiling.)

On having  his 7th Oscar nomination for “Silver Linings Playbook”: “I wanted to work with David [O. Russell] for awhile.  “The Fighter” was terrific.  We were circling each other. “

Hammond asked if he was a Philadelphia Eagles fan–they’re the obsession of his “SLP” character. DeNiro took a beat, which produced laughter… “Personally, I’m not into football.” 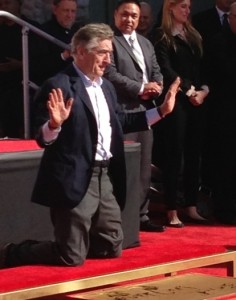 DeNiro then went on to talk about SLP.  “It was complicated.  There was a lot of business to do in the scenes, a lot of characters.   There’s always the pressure.  David’s style is conducive in that he moves fast, always a sense of immediacy.  Controlled chaos really.  ”

What about DeNiro’s legendary dedication to his performances?  That he learned to drive a taxi for “Taxi Driver.”

“I did drive a cab for a couple of weeks and no one recognized me.” He added it wasn’t a problem for the passengers and wouldn’t be now: “As I get older, I don’t get recognized as much as you think.” As for prepping for roles, other than gaining weight for “Raging Bull”:  “I learned to play the sax phonetically for New York, New York.”

There was a reel of clips from his films at the start of the event. Did DeNiro watch it?

Hammond asked about what he did to prepare for playing Rupert Pupkin in  Scorsese’s “The King of Comedy.”

“Marty and I saw a store as we were walking along Broadway.  There was a mannequin with an outfit that I liked.  We bought the whole thing, including the hair, I used that hairstyle. “

Does he like making comedies? He’s made so many in the last 20 years.

DeNiro: “I enjoy doing comedy, whatever kind it is.  I can’t do everything.  I can do certain things.  “Silver Linings” combined drama and comedy.”

DeNiro talked about his first role at the age of 10– The Cowardly Lion in sa school production of The Wizard of Oz. And then at 18 or so he got more serious and started to study acting.  He talked about various acting styles.

His best tip for actors?  “Whatever works for you.  What ticks you off is what you go with.”

DeNiro: “I’d like to direct more, only for things I feel strongly about, it takes a lot of time.”

He talked about his long friendship and relationship with Marty Scorsese.

DeNiro: “I’ve made 8 films with him.  Marty has a genuine great love and respect for actors and the crew.  We’ve had a long creative relationship, I want another one with him .  Actually I want to make it to 10.  Fifteen really, but realistically I want to get to 10.  I’m making “The Irishman” with him next.”

DeNiro: “I didn’t know if I wanted to play Johnny Boy or the other ones.  I wasn’t sure.  I settled on him.”

And was the famous line from “Taxi Driver”– “Are you talkin’ to me?”– was it in the script?

DeNiro: “I don’t remember.  I might have improvised it, I forget.”