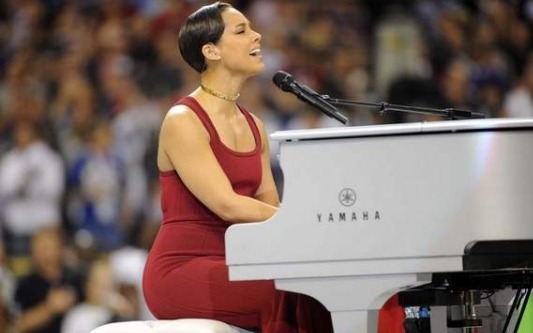 UPDATE: The NFL is blocking the video of Alicia singing “The Star Spangled Banner” on copyright grounds! Hilarious. They confirmed the following story.

Alicia Keys elegantly performed “The Star Spangled Banner” last night at the Super Bowl. And now she can apply for a copyright on it. Keys’ uniquely slow version, accompanying herself on the piano, also featured her own arrangement. Her little “tail” at the end — “livin’ in the home of the brave” –is her personal addition to the 200 year old song. “The Star Spangled Banner” is in the public domain. And you can get a copyright on a public domain song if you record it with your own arrangement. That means Keys could make money from its future use in that form, and get her a shared songwriting credit with composers Francis Scott Key and John Stafford Smith, who died in the 1800s.

Keys isn’t alone in her “Star Spangled Banner” copyright. BMI lists the song 307 times; ASCAP, 410. Jimi Hendrix played his own scorching guitar version at Woodstock in 1969 and got his own copyright. His estate makes money from that famous recording every time it’s used in a movie or played somewhere. Jose Feliciano has a copyright on the song, too, for his unique version. He plays it in public every chance he gets. Ka ching! (See below.)

The arguably best version of our national anthem ever sung at a sporting event was Whitney Houston‘s, at the 1991 Super Bowl. Houston is not listed as the copyright holder on that version. And she gave away the proceeds of sales of her single and recording to charity, as George H.W. Bush had just launched us into the Gulf War.

By the way, not everyone who sings “The Star Spangled Banner” — or otherwise records a song in the public domain– seeks a copyright, obviously. But those 700 or so instances that are registered with BMI and ASCAP are from times when the performer did something unusual enough to the original song to claim it. For Alicia, her version was no doubt an artistic choice. But it’s also one that will kick a few pennies into her coffers over time– unless she also donates it to charity.

PS I told you some time ago that Keys may have infringed on the copyright for the hit song “Hey There Lonely Girl” in her current hit, “Girl on Fire.” A lawsuit was filed against her subsequently by Earl Shuman, co-writer of “Hey There” with the late Leon Carr. I’m told a settlement may be in the works. In the meantime, ASCAP has removed Keys’s name from the song credits on its website until a final understanding is reached.