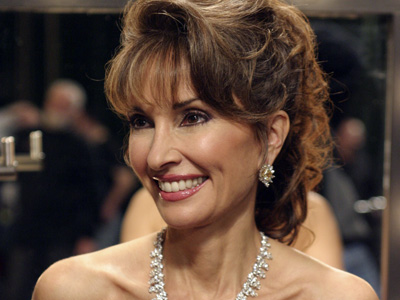 Just as  I told you last week, Prospect Park Productions has confirmed most of the “One Life to Live” cast for the Online Network including stars Erika Slezak, Robin Strasser, and Robert S. Woods. It looks like they’ve got just about everyone, with a few stragglers still coming in. But with “All My Children,” a show that ABC let fall to waste before its abrupt ending, things aren’t so easy. There’s still no sign of Susan Lucci, aka Erica Kane, and the star of the show. Right now, Prospect Park has managed only to line up sort of miscellaneous characters for the show.

But the lynchpins, so to speak, are Lucci and Michael E. Knight, as well as David Canary–who retired from the show but lives close enough to Stamford, Connecticut to put in occasional appearances. “All My Children” was really run into the ground over the last several years. They would have to get Julia Barr back, as well as a few others the show was forced to drop as their budgets were cut and their location was moved to Los Angeles from New York. Lucci is pretty busy, however, what with “Devious Maids,” the new Marc Cherry series for Lifetime, and a raft of other projects. If Prospect Park wants a success with “AMC” they’re going to have to make some kind of deal with Lucci– even if it’s for once a week.