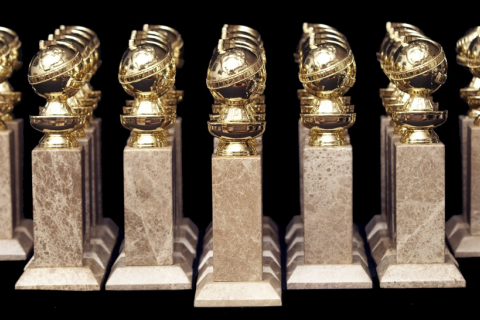 By the time the Golden Globes were over, the whole Beverly Hilton was bursting to party. On the 6th floor of the Hilton leading to the roof, I was nearly run over by the cast of “Les Miserables,” all of whom were in high spirits after their big wins in the Comedy/Musical category. Anne Hathaway led the charge down a narrow passage into the party carrying her Globe and smiling wildly. Director Tom Hooper and star Hugh Jackman were next, followed by co-stars Eddie Redmayne and Amanda Seyfried, as well as Sacha Baron Cohen with wife Isla Fisher.

“Les Miz” is a coup now for Universal Pictures chief Ron Meyer and his lieutenants Donna Langley and Adam Fogelson. It’s been a long time since Universal won anything, and now they can boast of a $200 million plus box office plus lots of shiny gold statues. For Hooper it’s also a real vindication after some tough reviews and a snub by the Academy Awards. The director of “The King’s Speech” looked a little exhausted at this point. “It’s been a long haul,” he said, recalling the very first screening on November 24th at Lincoln Center. Meanwhile, the Universal party was also home to “Zero Dark Thirty” director Kathryn Bigelow and screenwriter Mark Boal, who lost the Globes but finished their first wide release weekend at number 1. Today they head to London to launch “Zero Dark Thirty” in the U.K. Even though Bigelow makes serious movies, she has a good sense of humor. I asked how she liked Tina Fey’s joke about the “torture” of being married once to “Titanic” director James Cameron. It was the hit of the night. “It was very funny,” Bigelow conceded.

For a second Hugh Jackman showed us his Globe statue and said, “This is so great I can’t tell you.” And then we headed down to Club 55 in the basement of the Hilton, where HBO was literally teeming with celebrities from the casts of “Girls” and “The Newsroom” to miscellaneous stars like Jon Hamm and Jennifer Westfeldt to Jeff Garlin of “Curb Your Enthusiasm” and Steve Buscemi of “Boardwalk Empire.”

Jeff Daniels, his wife, Kathleen, Hollywood legend Jane Fonda and boyfriend Richard Perry (famed record producer of hits by Carly Simon, Rod Stewart, and Ringo Starr) and Sam Waterston were all having a fine time, while elsewhere a stunning  Nicole Kidman and Keith Urban were chatting with everyone. Kathleen Daniels  was busy telling Jane Fonda all about her family’s adventures renting a house in the Hollywood Hills after leaving their spacious abode in Michigan. Practical Fonda said, “I could live anywhere. When I was a girl we lived on a ranch and I rode a horse to school.”

But it was the “Girls” group that was causing the most excitement as literally everyone was climbing around to meet Lena Dunham, who won Best Actress in a Comedy and Best Comedy. Before “Girls” Dunham had a hit indie film called “Tiny Furniture.” That’s how it all started. She told me she’d like to do another film as soon as she can take a break from “Girls.” And she had high compliments for Adam Driver, who plays her boyfriend and also has a small part in “Lincoln.”

And Jeff Garlin told me he’s filming a stand up comedy special for Netflix in March, and waiting for Larry David to start another season of “Curb.” And Jon Hamm – who just finished the sixth episode of the sixth season of “Mad Men” – said Larry’s upcoming HBO movie—in which Hamm is featured—is hilarious. Hamm has one more season of ”Mad Men” to go before he takes off as a leading man in movies. And Westfeldt, always a delight, is busy, she told me, working on plays right now. Let’s hope she gets back to movies soon. Her “Friends with Kids” was a pretty terrific indie comedy last season.

Some other stars at the HBO party included Sean “P Diddy” Combs who was not his usual jovial self, and Mel Gibson, who remains a pariah despite attempts to seem human last night.