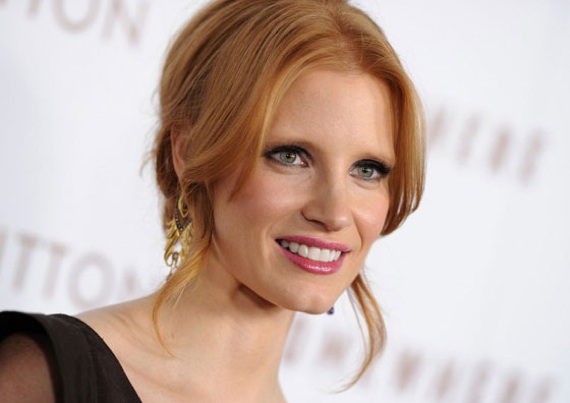 If you’ve paid $700 to see stars at the National Board of Review dinner next Tuesday (Jan 8), I think you’re guaranteed one will be very very late to the program if she gets there at all. Jessica Chastain, who won Best Actress from the fan based fee-mandated group for her work in “Zero Dark Thirty” has a 7pm curtain on Broadway that night for “The Heiress.” She’s been giving knockout performances for weeks.

And she will be there without fail. The show is three hours long, which is exhausting. The earliest Chastain could make it might be 10:30pm, by which time many NBR members may be tucked into their beds. And who knows how she’ll feel, considering “The Heiress” has two shows on Wednesday.

A featured Broadway player–even with awards to attend to–can only take so many nights off or disappoint ticket holders.  The red haired beauty will miss three performances, however: she’ll  be replaced by her capable understudy only on  January 10th and 13th, to accommodate the Critics Choice Awards on the 10th (on the CW Network, live, 8pm Eastern), the Golden Globes on Sunday January 13th (infamously on NBC) and then the Screen Actors Guild Awards (TNT)  on January 27th.

Chastain is in a heavy race with Jennifer Lawrence (“Silver Linings Playbook”) as the front runners for Best Actress this year. But they will likely split the winnings at the Globes, where Chastain should get the prize for Drama, and Lawrence for Comedy/Musical.

PS Even with the absences, “The Heiress” is a hit, and worth a visit if you can get tickets. The show closes February 10th, giving Jessica enough time to prepare for Oscar night.