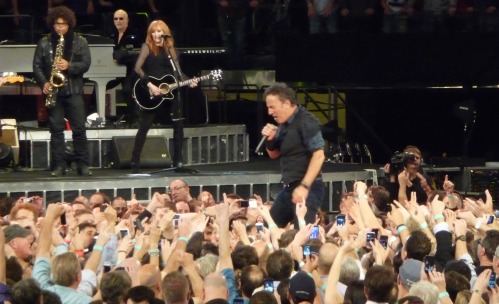 Smith, of course, had her biggest hit with Springsteen’s “Because the Night.” It’s too bad the Pointer Sisters aren’t coming, to sing “Fire.” Missing from the roster are some old Springsteen faves like Gary U.S. Bonds, Darlene Love, and Jesse Malin, as well as Southside Johnny or the E Street Band–but you can’t have everyone or everything. There’s also –this is odd– no mention of Mrs. S, Patti Scialfa. I hope she’s included.

MusiCares, meantime, has set up a Hurricane Sandy Relief fund for musicians in need out here on the East Coast. I know one musician (I can’t give names without permission) who I’m sure has contacted them after his house was destroyed out in Belle Harbor. If you’re connected to the music biz in any way and need assistance, go to www.musicares.com for info. They are a great and responsive organization.

Meantime, this may be the only sighting of Springsteen on Grammy weekend. I’ve been told that he’s not so keen on appearing on the Grammy show since his album “Wrecking Ball,” was relegated to Best Rock Album, a category that isn’t televised. At least it was nominated for something. Van Morrison’s beautiful “Born to Sing-No Plan Be” didn’t get bupkis.